Now just one week away from the second Democratic primary debate, there is no shortage of polling and analyses of the standing of the presidential contenders. 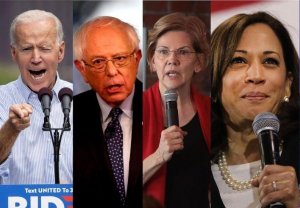 Today, the Morning Consult, which does a weekly survey of national and early state registered voters, released a look at who is supporting the candidates, broken down by demographics.

The interviews were collected July 15-21, 2019, from 17,285 interviews with registered voters who indicated they may vote in the Democratic primary. The margin of error +/- 2%.

The Big Picture
What are the target demographics for victory in the general election?

According to Pew Research, Nonwhites will account for one third of eligible voters, the largest share ever, driven by long-term increases among certain groups. For the first time Hispanics are expected to be the largest racial or ethnic minority group in the electorate, accounting for just over 13% of eligible voters, slightly more than black voters.

Seniors will also play an important part, as will younger voters.

Then there are women, who voted 54% for Clinton over 41% for Trump in 2016, and are expected to once again account for more than half of the electorate in 2020, and who also now comprise 50.2% of the college-educated labor force.

Regardless of the numbers, it will come down to getting out the vote, and which candidate will ultimately motivate each demographic to get to the polls.