North Carolina has joined center stage as one of the most contested swing states of the 2016 election, where Clinton is leading Trump by a narrow 1% margin.

The traditionally red Tar Heel State voted Republican in every presidential from 1980 until 2008, when it awarded its 15 electoral votes to Democrat Barack Obama's by a 0.33% margin over John McCain. Mitt Romney won the state back for the GOP in 2012, solidifying North Carolina's place among the country's battleground states.

North Carolina is also a battleground for voter suppression; a July court of appeals ruling reversed longstanding voter ID laws which had targeted minority voters in the last two cycles.

To help raise voter awareness, David Byrne, Composer, Songwriter and legendary Talking Heads singer will be in Charlotte this weekend - to lead an Election Cycle Rally!

The author of Bicycle Diaries and an entourage of entertainers will kick-start GOTV (Get Out The Vote) weekend with a 10K bicycle ride on Saturday, November 5th, the last day of one stop early voting. 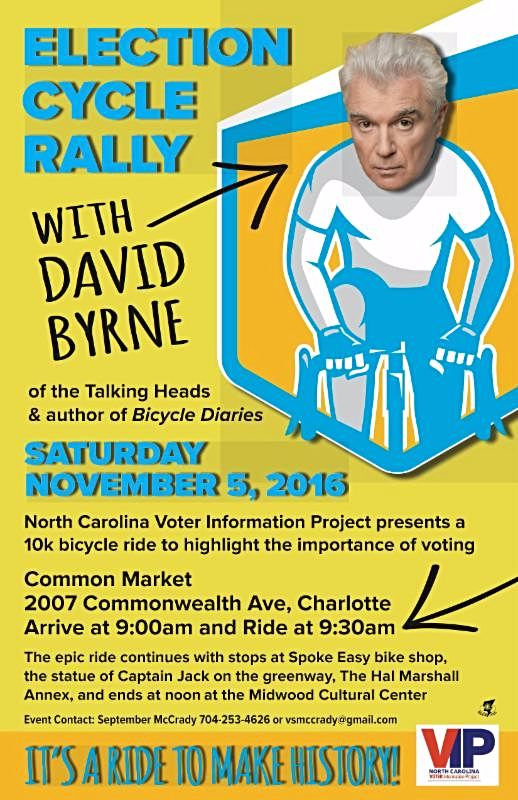 But Donations welcome! To Contribute to the Cause:
Go to the PV Donation Page & Select VoterID from the drop down menu!
The NC Voter Information Project is a campaign of Project Vote.
Checks payable to "Project Vote", PO Box 782, Granby, MA 01033

As always, DemList will connect you with the people who are doing it right. Get out and VOTE!