Yesterday, Colorado Congressman Earl Perlmutter became the latest of eight members of Congress, all Democrats, who have announced their retirements in the last six weeks, bringing the number of House departures to 38 going into the midterm elections. 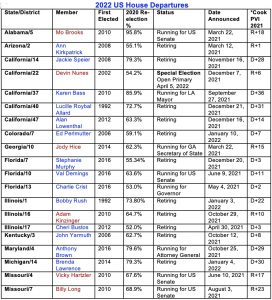 With more than twice the number of Democrats relinquishing their seats, and with the anticipated shift in congressional maps this fall, Republicans are savoring the increasing odds of taking control of the US House in 2022.

Although more than half of those departing are in congressional districts that are securely "red" or "blue," the decennial redistricting means that all 435 congressional elections in 2022 will take place in newly drawn districts.

The US Census numbers used to redraw the maps, however, were historically delayed by months due to the pandemic and interference by the Trump administration. 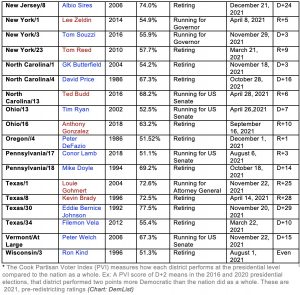 While roughly two-thirds of the states have approved their new maps, the battle lines still being drawn mean some members and candidates still do not know where or if they will be running in 2022.

Still, the new state maps approved to date have been kinder to Democrats than expected, providing hope for reducing the damage historically inflicted upon the party in the White House in off-election years.

With Democrats currently holding a nine-seat majority in the US House, the GOP will have to flip just five seats to take control.

Cherfilus-McCormick will be the first woman to represent the district and the first Democratic Haitian-American ever elected to Congress. 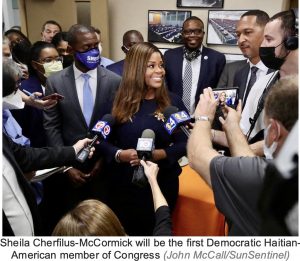 California 22nd Congressional District
With the announcement by Republican Congressman Devin Nunes (CA-22) in December that he was departing Congress as of January 1, 2022, there is just one special election on the 2022 calendar.

Governor Gavin Newsom (D) scheduled the nonpartisan blanket primary for the San Joaquin Valley-based seat for April 5, 2022, where candidates of all parties will run in the same primary. If no candidate receives a majority of votes, the top two candidates will advance to the general election, scheduled for June 7, 2022.

The winner of the special election will represent the current 22nd Congressional District through January of 2023.

July 30, 2018 The civil rights movement has had many faces throughout history, but among the lesser known soldiers are Americans with disabilities. It was not until July 26, 1990 that the...