Now almost five months into the 2022 election cycle, eleven House members have announced their retirements or plan to leave to run for a higher office.

Five-term Illinois Congresswoman Cheri Bustos (D) was the latest to announce, on April 30th, that she would not be seeking reelection in 2022. 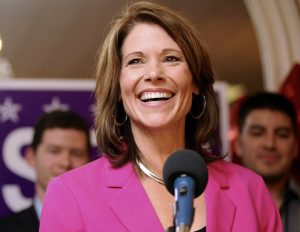 Bustos' decision came on the heels of the April 26th release of Census Bureau reapportionment numbers that showed that Illinois would lose one Congressional seat during redistricting. The Prairie State is one of seven states that will lose a congressional seat, along with California, Michigan, New York, Ohio, Pennsylvania and West Virginia.

Bustos, who served in leadership as Chair of the Democratic Congressional Campaign Committee (DCCC) in 2020, is the fifth House Democrat to announce they are retiring or seeking another office, compared to six departures by House GOP members.

Among Republicans, the most recent casualty is three-term Congressman Ted Budd (R) who announced on April 28th that he would be running for the 2022 US Senate seat in North Carolina being vacated by Senator Richard Burr (R), who is retiring.

Party politics, of course, also play a role. Amidst the Trump turmoil of the 2020 cycle, Republicans witnessed a mass exodus of 27 House members (including one Libertarian who left the GOP) compared to just nine retiring Democrats. An additional eleven House members left office mid-term, including eight Republicans and three Democrats. 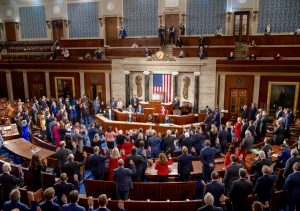 In 2018, a total of 48 Republicans opted not to run for reelection or left early, more than twice the number of Democrats' 21.

This year's departures are just the beginning of an anticipated rollout of retirements, particularly in the thirteen states where redistricting is diminishing or shifting the boundaries of Congressional districts.

Due to delays caused by the Trump administration and the coronavirus pandemic, the final "census block" numbers used to draw new Congressional and legislative districts, normally completed by March, will not be released until mid-August.

In the interim, dozens of lawmakers are on hold waiting to see where, and if, they will be running for reelection. 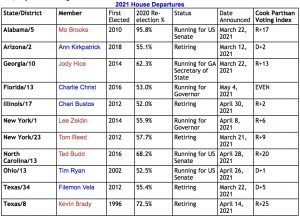 Special Elections have or will take place for seven other Congressional members, three of whom passed away in office and four who have left mid-term to seek another position.

Candidates run in either a traditional primary and general election, or in a "jungle" primary where candidates of both parties run at the same time. In that case, if no one candidate receives a certain percentage of the vote, usually 50+%, then the top two vote-getters go to a runoff. 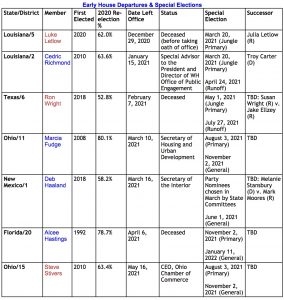