This morning brought the good news Internationally that, for the first time, China has not reported any new local cases of coronavirus, giving hope that there is actually an end date to the crisis, albeit a distant one. 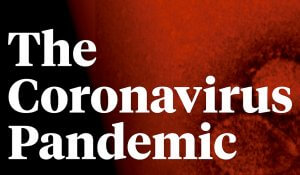 Domestically, however, the first two Members of Congress reported testing positive for coronavirus, underscoring the reality that the disease does not discriminate, and that many more will pay the price for the Trump administration's delayed response to the pandemic.

Experts estimate that the United States is about three weeks behind Europe in its efforts to contain the pandemic.

Denial and Delay
Less than three weeks ago, at a February 28th campaign rally, President Trump accused Democrats of politicizing the pandemic, calling the outbreak "their new hoax" and pointing out that the US had not, at that point, lost anyone to the virus.

One week later, on March 6th, the Center for Disease Control (CDC) reported 307 cases of coronavirus, including 17 deaths. Worldwide, there were over 110,000 reported cases and 3,300 death.

That morning, at a press conference at the CDC, Trump fought off questions about the Grand Princess, a cruise ship with a reported 21 coronavirus cases, which was scheduled to arrive 72 hours later in Oakland, California. At that point the administration did not have a plan for dealing with the ship's 3,533 passengers, which included 1,000 California residents.

Trump said he was opposed to having the Grand Princess's passengers de-board because doing so would increase the official count of US coronavirus cases. "I don't need to have the numbers double because of one ship that wasn't our fault. I'd rather have them stay on, personally," said the President. 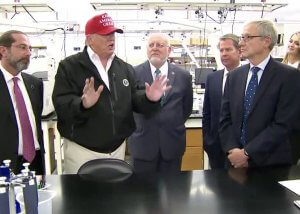 Trump Visits at CDC. "It will go away" (mysuncoast)

The ships passengers did not know that people on board were infected until they learned it from watching a press conference with Vice President Mike Pence later the same day.

On March 10th, Trump, under attack for the lack of preparedness and slow response by the administration, was asked if he had been briefed, as reported, that up to 100 million Americans would ultimately be exposed to the virus.

Trump countered only that he'd seen "some very good numbers coming out of some countries where (the coronavirus) started earlier... a lot of positive. Different numbers. All different numbers. Very large numbers. And some small numbers too, by the way." He concluded, "we're prepared, and we're doing a great job with it. And it will go away. Just stay calm. It will go away."

As the US stock market started to experience record losses in response to the escalating crisis, however, the reality hit home for Trump, who is resting his reelection on a strong economy.

On March 13th, President Trump declared a national emergency, allowing for a release of up to $50 billion dollars in disaster relief funding to help states combat the rapidly spreading disease. 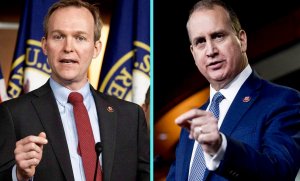 Rapid Response
On March 14th, the Democratic-led US House passed the House Coronavirus Assistance Bill, which will ensure free coronavirus testing, paid sick and family leave, unemployment benefits and food and medical aid to those affected by the pandemic.

The US Senate approved its version March 17th, which was immediately signed into law. The 90-8 vote came after Senate Majority Leader Mitch McConnell appealed to fellow Republicans, saying, "This is a time for urgent bipartisan action, and to detractors, "gag and vote for it anyway."

The package would provide for loans to business and relief to taxpayers in the form of direct payments to taxpayers, to be issued on April 6 and May 18. Payments would depend on the recipient's income and family size.

Sign Up for the Dailys on the issues, politics and players

August 30, 2021 The US Senate currently stands at 50 Democrats, including two Independents who caucus with the Democrats, to 50 Republicans. As Vice President Kamala Harris serves as the President...