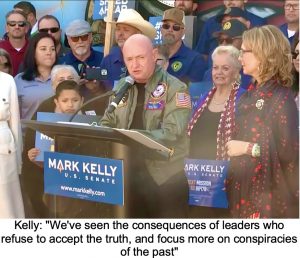 Democratic incumbents Mark Kelly and Catherine Cortez Masto triumphed in their races this weekend, cementing their party's control of the US Senate for at least the next two years.

The fate of the US House, however, still hangs in the balance with 18 races uncalled six days after the country's historic rejection of the red wave of extremism under the influence of former President Donald Trump.

At 10:14pm ET Friday night, Arizona was called for Kelly who, with 83% of the vote counted, led conservative Trump-endorsed challenger Blake Masters by 5.7%.

Cortez Masto's victory in Nevada was declared Saturday at 9:44pm ET, after 22,323 mail-in ballots recorded from Clark County put her ahead of Trump-backed Republican Mark Laxalt 48.7% to 48.2%. 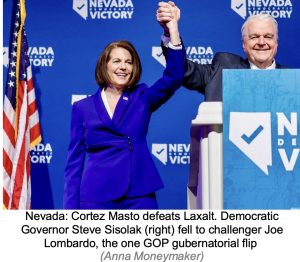 “Nevadans rejected the far-right politicians working to divide us," said Cortez Masto. "We rejected their conspiracies, their attacks on our workers and their attempts to restrict our freedoms.”

The victories mean Democrats will keep at least their 50-50 majority in the Senate, where Vice President Kamala Harris holds the tiebreaking vote for the party.

Should the December 6 Georgia runoff election between incumbent Raphael Warnock (D) and GOP challenger Herschel Walker go to Democrats, they will have gained one seat for what is still a razor-thin 51-49 majority.

While the results of Alaska's Senate seat are also unknown, it is a predetermined GOP seat, with incumbent GOP Senator Lisa Murkowski (44.2%) and Republican challenger Kelly Tshibaka (44.8%) awaiting the results of the ranked-choice voting tabulations November 23rd. 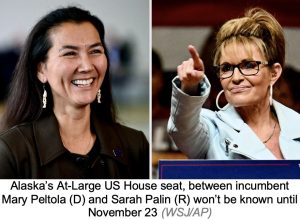 The majority of undecided races are in California, where ballots postmarked by Election Day have a week to arrive and are still being counted. 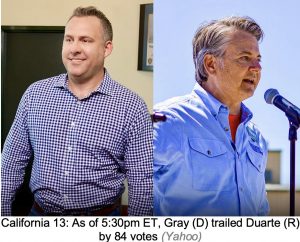 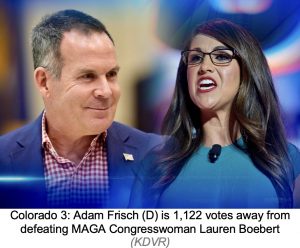 News outlets have altered their projections in the last 24 hours, narrowing the anticipated outcome for the GOP takeover of the US House to within five seats. The numbers, nevertheless, represent an astounding victory for Democrats, who were originally projected to lose as many as 45 seats in the midterm elections.

Tomorrow: Update on the (Other) undecided elections

August 24, 2022 Voters in Florida and New York went to the polls Tuesday to decide, among others, critical statewide races, the victors of two House special elections, and a historical showdown...