This week, the Democratic National Committee (DNC) kicked off a general election offensive campaign in the field, on air, online and at the ballot box. 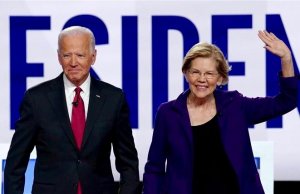 Taking the Battle to the States
The DNC announced a five-week battleground states tour with Chair Tom Perez and Massachusetts Senator Elizabeth Warren.

The tour, which began on Tuesday, the five-year anniversary of Trump's first campaign launch, will start in Florida and wind through other swing states where Perez "will be joined along the way by stalwart Democrats who represent the breadth and depth of our party up and down the ballot and across communities."

Attacking the Airwaves
The DNC War Room released a one-minute television and digital ad entitled "Descent," starting with Trump's kick-off campaign five years ago, when he descended down the gold escalator in Trump Tower, projecting an image that has become a metaphor for his presidency. "Ever since, he's tried to take the country down with him." 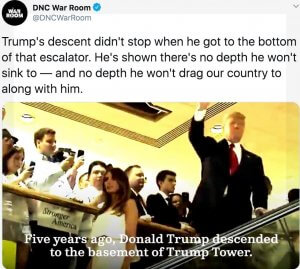 "He turned our military on American citizens. You have the power to end the decent of our nation, to choose justice, unity, leadership because we can't afford four more years of Trump."

The "six figure television buy" will run four to five weeks. Other upcoming ads are expected to focus on Trump's trade dispute with China, and Trump's response to the coronavirus crisis.

Tackling Tech at the Ballot Box
A high tech force has been a priority under DNC Chairman Tom Perez, who has overhauled the party's data practices and technology tools since elected in 2017.

The latest addition to the DNC's "toolbox," was rolled out Tuesday, designed to help Democratic campaigns and state parties contact voters who have either been purged from active voter rolls or marked as inactive voters. 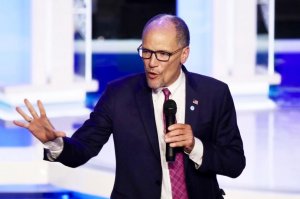 DNC Chair Perez: For the last five years, Trump has brought America down with him (CNN)

*   Voter Contact: Enables staff to quickly contact a universe of purged or inactive voters and take the steps necessary to re-register them or help them protect their voting status.

This is particularly critical for 2020 battleground states, where state elections, and the presidential, could be decided by a few thousand votes.

To understand the magnitude of voter suppression in registration and rolls, which usually disproportionately affect minority voters, one need only look to Georgia, a potential swing state this November. In 2018, former GA State House Minority Leader Stacy Abrams (D) lost, by 54,000 votes, the Governor's race to Republican Brian Kemp, who, as Georgia Secretary of State, had oversight over the election in which he was a candidate. 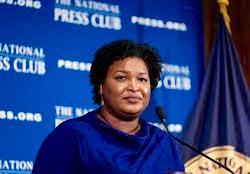 Stacey Abrams, whose 2018 gubernatorial loss was marked by voter suppression, is considered an underdog candidate for Biden VP (MichaelMcCoy/AP)

Under Kemp's direction, prior to election day, over 340,000 voters were removed from the rolls on the grounds that they had moved - when they actually still lived at the address where they are registered. An investigation also found that 53,000 voter registrations were delayed by Kemp's office without adequately notifying the applicants.

The national party is now faced with new tech challenges as it prepares to conduct the Democratic National Convention, partially, or in full, online.

On May 12th, the DNC's Rules and ByLaws Committee (RBC) voted to allow aspects of the Milwaukee, Wisconsin Convention, postponed because of the coronavirus pandemic to the week of August 17th, to be held virtually.