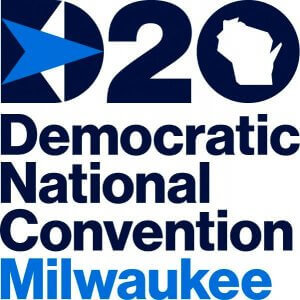 The Democratic National Convention Committee (DNCC) yesterday announced the long-awaited decision that the Democratic Convention, while anchored in Milwaukee, Wisconsin, will be held virtually "across America."

The convention, scheduled for August 17-20, 2020, will include four nights of programming that "will reach beyond the expected, engage delegates and voters in innovative ways, and unite the country around our shared values."

In April, the DNCC postponed the Convention, originally scheduled to take place July 13-16th, by five weeks due to the health risks imposed by the ongoing coronavirus pandemic, which has now claimed the lives of close to 123,000 Americans.

*  The committee is advising state delegates not to plan to travel to Milwaukee. All official convention business, including including the presidential nomination, will be conducted remotely.

*  The DNC standing committee meetings will take place virtually as well, with the first meeting set for the last week of July.

*  Although final numbers will not be finalized until after public health officials complete their assessment later this summer, attendees could be capped at as few as 1,000 people. 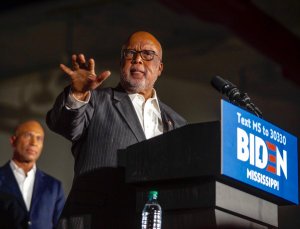 Congressman Bennie Thompson (MS-2), who was announced as Convention Chair, will preside over all official convention business (Mississippi Today)

*  The primary convention campus has been shifted from the state-of-the-art Fiserv Sports Arena, to the much smaller Wisconsin Center, the city's convention center located in downtown Milwaukee.

*  Production of the convention's program, including the satellite broadcasts, will be led by nine-time Emmy-award winning producer Ricky Kirshner, who has produced the Tony Awards since 2004, the Super Bowl Halftime Show since 2007, and has worked on every Democratic National Convention since 1992.

*  The Convention program will include both live satellite broadcasts and curated content from Milwaukee and other satellite cities, locations and landmarks across the country. Through multiple formats and mediums, it will also "celebrate the promise of America by featuring the people and their stories that represent the strength and collective humanity of our nation."

*  Biden will accept the party's nomination and deliver his acceptance speech from Milwaukee on Thursday, August 20th. The vice presidential nominee will to do the same one night earlier.

*  Official auxiliary events, such as the traditional welcome reception for media, delegates, volunteers and other in-person events, have been cancelled to avoid public health risk.

* Convention organizers, starting this week, will launch the first of a series of engagement campaigns that will allow Americans nationwide "to share their ideas and add their voice to convention programming." 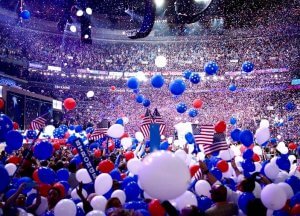 There may not be an audience, but there will still be a show! (Jessica Kourkounis)

* In addition to the announcement of Mississippi Congressman Bennie Thompson as Convention Chair, the DNCC is also bringing on board nationally-renowned epidemiologists and infectious disease experts Dr. W. Ian Lipkin and Dr. Larry Brilliant to help advise on efforts to protect the health and safety of convention participants and the people of Wisconsin.

According to a June 17-22, 2020 University of North Florida poll, 58% of Jacksonville voters oppose holding the convention in the city.

In Jacksonville, Trump will address his supporters on the 60th anniversary of "Ax Handle Saturday," when a white mob organized by the Ku Klux Klan attacked mostly black civil rights protesters sitting at the city's whites-only lunch counters.