The Democratic National Convention Committee (DNCC) announced today that the Democratic Convention, scheduled to take place July 13-16th in Milwaukee, Wisconsin, has been postponed to the week of August 17th.

The decision comes as the country reels from the devastation of the escalating coronavirus pandemic which has now claimed over 5,700 American lives and 50,000 worldwide.

DNCC CEO Joe Solmonese said it was "the smartest approach...During this critical time, when the scope and scale of the pandemic and its impact remain unknown."

The postponement is part of the massive shift in the primary calendar and already historic presidential election that has seen fifteen states postpone or delay their Democratic presidential primary contests.

Eleven states will now be holding their primaries on June 2nd, one week prior to the close of the normal primary season, and West Virginia and New York became the latest to push back their elections, now scheduled for June 9th and June 23rd respectively.

Under DNC Rules and By-Laws, the deadline for holding primaries is June 9th, and national convention delegates must be elected by June 20th, but Party leaders are working daily with state and local officials to adjust under the unprecedented circumstances. See DemList's Presidential Primary Calendar for updates.

The postponement of the convention by five weeks also mean that Democrats will select their nominee just days ahead of the beginning of the Republican convention, scheduled for August 24-27 in Charlotte, North Carolina.

In the two-way primary race for the nomination, former Vice President Joe Biden is leading the delegate count with 1217 to Senator Bernie Sanders' 914, but Sanders has given no indication of getting out of the race any time soon.

The convention delay is welcome news to businesses and civic leaders throughout southeast Wisconsin which are counting on an estimated infusion of $200 million into the local economy, and who feared the convention may be cancelled or held virtually.

While keeping a critical lense on the health crisis, the Democratic National Committee (DNC) is ramping up its already robust digital organizing operation, which has been a major focus under Chairman Tom Perez's leadership -- and is already in daily overdrive with the shift in primaries and voting in the states.

Convention 101
The Purpose: The Democratic National Convention is the formal event, every four years, in which Party delegates and members convene to choose their nominees for President and Vice President. 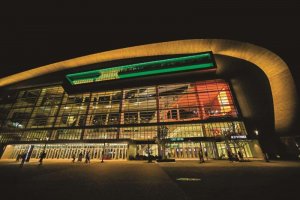 The Main Venue: The Fiserv Forum

At the Convention, the Party also adopts the official Democratic Party platform as well as the rules and procedures governing party activities, including the nomination process for presidential candidates in the next election cycle.

The Place
Milwaukee, Wisconsin
The Week of August 17, 2020

The Fiserv Forum, the state-of-the-art home of the Milwaukee Bucks, will serve as the main venue for the convention. Events will also take place at the Wisconsin Center as well as in venues and hotels throughout the city.

Votes will be cast by convention delegates, who are elected during state primaries, caucuses, and local and state party conventions based on candidate preference.

The People: All told, 50,000 delegates, elected and party officials, donors, activists, lobbyists, labor, celebrities, media and volunteers will attend. Another 35 million+ are expected to tune in nightly by television or online. 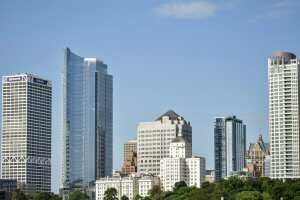 57 state delegations, as well as donors, media and volunteers, will stay in 17,000 hotel rooms secured by the DNCC in Milwaukee and the region.

The Experience
The four-day Convention is the largest single gathering of party leaders, activists and influencers. In 2016, participants posted close to 500 official, unofficial, private and public events to the free DemList Convention Calendar, and we will be hosting the 2020 Convention Calendar.