On Monday, over 100 state legislators representing more than 30 states converged on Washington to support their Texas colleagues in pushing the Senate and President Biden to take action on voting reform legislation.

The Texas battle has become symbolic of Republicans' nationwide effort to pass extreme voter restriction laws which disproportionately disenfranchise citizens of color and underprivileged communities from exercising their right to vote. 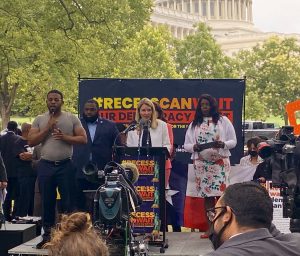 This afternoon, legislators from across the country gathered across from the US Capitol to call for the US Senate to pass the For the People Act before they recess for the summer.

The US House of Representatives, which recessed last Friday, passed the Act on March 3, 2021, which would expand voting rights and mitigate some, but not all, of the voter suppression provisions passed in the states.

The Act, H.R.1, would force states to offer at least 15 days of early voting, universal access to mail-in voting, same-day registration for federal races, and stop states from purging people from voting rolls, among other measures.

The For the People Act would also overhaul campaign finance and ethics rules, and ban partisan gerrymandering. The Senate companion bill, S.1, was introduced March 17th. On June 22nd, the Senate rejected debate on the bill by a vote of 50-50 along party lines, shy of the 60 votes needed to surpass the filibuster and proceed.

Senate Democrats are working on rewriting the legislation, including revisions proposed by moderate Senator Joe Manchin (D-WV), who voted in favor of debate, but is opposed to eliminating the filibuster rule, or making an exception in order to pass the voting rights bill.

Revisions are also likely to include language aimed at shoring up the Voting Rights Act of 1965, which was weakened under recent Supreme Court decisions.

In the interim, President Biden has said his Department of Justice will "be using its authority to challenge the onslaught of state laws undermining voting rights."

Tuesday's action by legislators was organized by Declaration for American Democracy, a coalition of 22 activist groups supporting the For the People Act. It followed Monday's Poor People's Campaign protest outside the US Senate, where 200 hundred people were willingly arrested as they demanded an end to the filibuster in order to pass voting rights legislation.

October 18, 2021 Among the many unforeseen consequences of the coronavirus pandemic has been the collective impact of consumer spending, labor shortages and clogs in transportation that has...