Among the now daily repercussions of the coronavirus pandemic is the impact the crisis is having on the 2020 race for the White House.

In the last four days, Louisiana, Georgia, Puerto Rico and Kentucky have postponed their presidential primaries. Wyoming has suspended in-person voting in its upcoming primary, urging people to vote by mail instead. Other states are are encouraging early and absentee voting. 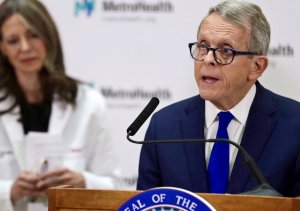 DeWine Calls off Ohio Elections. As of today, Ohio reported 50 confirmed coronavirus cases and no deaths.

The New Reality
Around 3:00pm yesterday, Ohio Governor Mike DeWine (R) announced the state had filed a lawsuit to halt the state's Tuesday primary, citing the dangers of the pandemic.

At 7:00pm, Franklin County Judge Richard Frye denied the request, ruling it would "set a terrible precedent," and that "there is no medical evidence" to suggest the pandemic will have disappeared by the proposed June 2nd date.

Just after 10:00pm last night, DeWine announced that Ohio Director of Public Health, Dr. Amy Acton, was ordering the polls closed Tuesday due to the "health emergency." DeWine tweeted that "Secretary of State Frank LaRose will seek a remedy through the courts to extend voting options."

While DeWine was praised by some for prioritizing safety, others assailed his action of directly defying a court order as voter disenfranchisement and suppression. The end result, regardless, is chaos for Ohio voters. 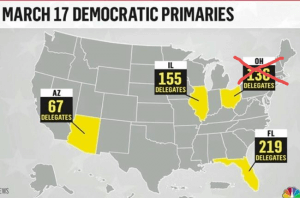 Today's primaries in Arizona, Florida and Illinois: 441 Delegates at stake

Today's Primaries
Governors in the three state primaries taking place today in Arizona, Florida and Illinois have assured the public extra precautions are being taken. Governor J.B. Pritzker (IL) announced that every voting machine would be sanitized inbetween use and that hand sanitizer will be readily available at each polling station.

In Arizona, the Maricopa County Elections Department closed 78 polling locations, citing a shortage of cleaning supplies. Instead, voters may cast ballots at any of 151 geographically-dispersed polling centers.

In Florida, voting rights groups today asked a federal court for an extension of vote by mail ballots as well as other accommodations at polling places "necessary to protect the fundamental right to vote."

After today's contests, 30 states or territories will have held their primaries or caucuses, and 47% of the voting pledged delegates will have been awarded. 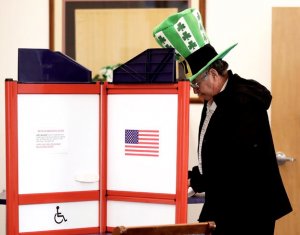 With the state cancellations, the next primaries are not up until April 4th in Alaska and Hawaii, along with the Wyoming Caucuses (53 Delegates).

A lot can happen in two weeks.