Defiance of Coronavirus-related restrictions are playing out daily across the country in communities, in legislatures and in the courts, underscoring the increasing divisions in this unprecedented time in the history of our country.

At a time when Americans should be coming together during the devastation of the novel coronavirus pandemic, the current occupant of the White House continues to push a dangerous narrative that further fuels the actions and appearance of the red state-blue state divide. 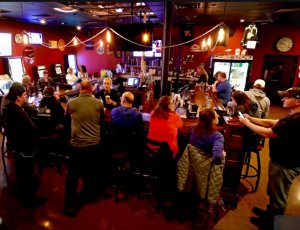 The Tavern League of Wisconsin posted to members "You can OPEN IMMEDIATELY!"(AP)

On Wednesday, in the critical battleground state of Wisconsin, the state's Supreme Court overturned Democratic Governor Tony Evers' Safer At Home order, which has been extended from April 24th to May 26th.

The court's conservative majority, in a 4-3 decision, declared the order, officially imposed by Health Services Secretary Andrea Palm, "unlawful, invalid and unenforceable," ruling Palm had overstepped her authority in extending a statewide shutdown.

As with most states, the order mandated limited travel, closing of non-essential businesses, and requiring people to stay at home except for essential personal activities. Within hours of the decision, bars across Wisconsin were packed.

Liberal justice Rebecca Dallet dissented, writing that the court's decision will "undoubtedly go down as one of the most blatant examples of judicial activism in this court's history. And it will be Wisconsinites who pay the price."

With the statewide stay-at-home order lifted, it is up to municipal governments to decide what, if any, restrictions they want to impose in their own communities. 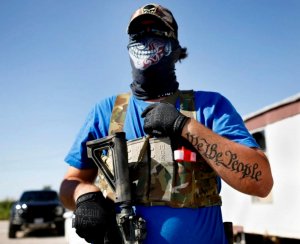 An armed protester protects a tattoo parlor in Odessa,Texas, which reopened in defiance of COVID restrictions (Eli Hartman/Odessa American)

Wisconsin was already an early test of voting in the age of the coronavirus when a last minute legal volley between Evers and the courts resulted in residents being forced to decide between their safety and going to vote in-person in the Badger State's April 7th primaries. At least 52 of the state's 11,648 cases of infection have been traced to exposure at the polls.

In Pennsylvania, where Governor Tom Wolf (D) has lifted partial restrictions on 37 of the most rural counties, but where a stay-at-home order is still in place for the remaining 30 through June 4th, several Republican-led counties say they plan to defy his timeline and start reopening businesses today.

President Trump egged on the defiers during a visit to a medical distribution center in Allentown on Thursday, saying, "We have to get your governor of Pennsylvania to start opening up a little bit. You have areas of Pennsylvania that are barely affected and they want to keep them closed. Can't do that."

Trump's visit to the state, which he won by less than 1% in 2016, and which is critical to his re-election, was made the trip under the auspices of promoting his new effort to replenish the Strategic National Stockpile, which he now publicly touts as depleted due to the ineffectiveness of the Obama administration. 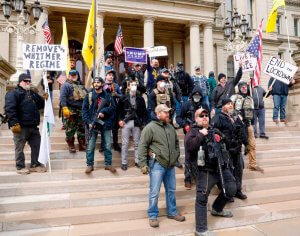 The Face of Michigan Protestors (ABCNews)

Prior to the trip, Trump tweeted, "The great people of Pennsylvania want their freedom now, and they are fully aware of what that entails." It was his 18th trip to the battleground state since being elected, and where more than 61,000 confirmed cases of COVID-19 have been reported, including close to 5,000 deaths.

A Washington Post/Ipsos poll released this week showed that 72% of Pennsylvania adults approved of how Governor Wolf has handled the coronavirus outbreak, including 51% of Republicans and Republican-leaning independents.

In Michigan this morning, a crowd of 200 gun-toting protestors rallied against the state's stay-at-home order, which Governor Gretchen Whitmer (D) has extended to May 28th. One sign said "Dangerous safety is better than safe tyranny."

On Thursday, the Republican-controlled Michigan State House and Senate voted on a resolution challenging Whitmer's executive authority during the pandemic, and passing another bill that would begin to reopen businesses with restrictions. Whitmer said she would veto the bill.

President Trump previously tweeted his support for armed protestors, calling them "very good people," and at one point calling to "LIBERATE" the state, along with Virginia and Minnesota, which also have Democratic governors. 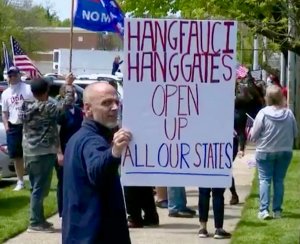 Trump has proudly claimed the protestors as "my people" and, with that, ownership of the violence, anger and the self-serving actions of his most public supporters.

The cost of those actions goes beyond partisan lines and will be tested in the rising numbers of Americans infected with the novel coronavirus -- which now stands at 1,432,045, including 86,851 lost lives.

DemList is relying entirely on individual donations during this time. Please help with a$15, $25 or $50contribution today!
SignUpfor the Daily updates on the issues, politics and the players. Follow us onFacebook, Twitter&LinkedIn
Sources: WashingtonPost, Time, The Guardian, New York Times, CNN, JohnHopkins

September 21, 2021 After a months-long delay due to the COVID pandemic, demographic numbers from the 2020 US Census report were released last month, revealing that the United States is more...