DemDaily: Decisions From The Docket: Voting Rights, Money and Trump

DemDaily: Decisions From The Docket: Voting Rights, Money and Trump

Three major court decisions were announced yesterday -- two from the Supreme Court of the United States and one from the Manhattan District Attorney.

SCOTUS
In its final two decisions of the 2020-2021 term, the Supreme Court delivered a major blow to voting rights and overturned contribution regulations that may have significant implications for campaign finance law. 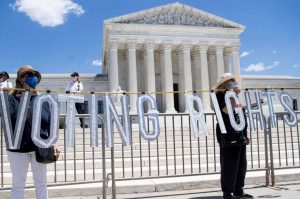 At question in Brnovich v. Democratic National Committee was whether two Arizona voting laws violated either the Voting Rights Act or the Fifteenth Amendment.

Arizona offers two methods of voting:
1) In-person at a precinct or vote center either on election day or during an early-vote period. Under the precinct-based system, registered voters may vote only at their designated polling place. If a voter is not listed on the precinct's voter rolls, she may cast a provisional ballot. If election officials determine a provisional vote was cast out of precinct (OOP), even by an eligible voter, the county discards the ballot in its entirety.

The DNC challenged the OOP policy as violating Section 2 of the Voting Rights Act because it adversely and disparately affects Arizona's Native American, Hispanic, and African American citizens, resulting in the rejection of the votes of minorities by a 2 to 1 ratio.

2) Early Voting whereby the voter receives the ballot by mail and either mails back the voted ballot or delivers the ballot to a designated drop-off location. Many voters, particularly minorities and Native Americans, rely on third parties to collect and drop off voted ballots, sometimes called "ballot harvesting."

Despite no evidence of fraud in Arizona's 25+ year history of third-party ballot collection, Republican legislators in 2016 passed H.B. 2023, which criminalized the collection and delivery of another person's ballot. The DNC challenged the law as violating Section 2 of the Voting Rights Act and the Fifteenth Amendment because it was enacted with discriminatory intent. 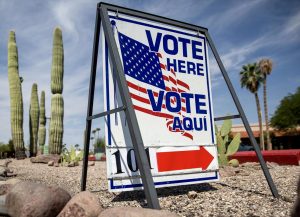 The US Court of Appeals for the Ninth Circuit agreed with the DNC, but yesterday the Supreme Court overturned their ruling. In a 6-3 decision along ideological lines, SCOTUS held that Arizona's out-of-precinct policy and H.B. 2023 do not violate Section 2 of the Voting Rights Act, and H.B. 2023 was not enacted with a racially discriminatory purpose.

In doing so, the Court significantly weakened the last remaining vestiges of the Voting Rights Act of 1965.

Writing for the majority, Justice Samuel Alito outlined "guideposts" for future challenges to voting laws under Section 2 of the Voting Rights Act, which are expected to make it significantly more difficult to challenge state voting laws moving forward.

As of June 21st, 17 states had enacted 28 new laws that restrict voting access this year, including two more in Arizona, which is now a swing state in presidential elections.

The case was brought by two conservative organizations - the Americans for Prosperity Foundation, a conservative advocacy group closely associated with the billionaire Koch brothers, and the Thomas More Law Center, a conservative law firm. 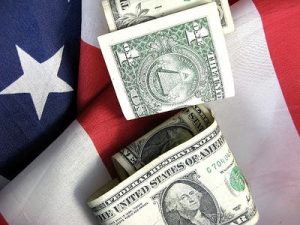 The groups argued that a California policy requiring tax-exempt 501(c)(3) charitable organizations to disclose the names and addresses of major donors violated First Amendment privacy concerns and deterred their donors from making contributions.

In a 6-3 ruling along ideological lines, SCOTUS agreed. Chief Justice John Roberts, writing for the majority, acknowledged that "California has an important interest in preventing wrongdoing by charitable organizations." However, said Roberts, "California's disclosure requirement is facially invalid because it burdens donors' First Amendment rights and is not narrowly tailored to an important government interest" as required under the exact scrutiny standard.

He also reasoned that it was appropriate for the court to deem the disclosure requirement invalid in all circumstances, rather than only in the challengers' case. In doing so, it sets a new legal standard for all donor disclosure laws, with broader implications for campaign finance law.

This could be the most impactful decision since SCOTUS' 2010 Citizens United ruling, which stripped the government of its power to limit the amount of spending on elections, especially by corporations. 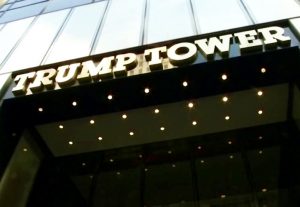 Weisselberg, 73, was charged with 15 felony counts including grand larceny, criminal tax fraud and falsifying business records. In ten of the cases, Weisselberg was charged alongside Trump corporate entities.

"Today is an important marker in the ongoing criminal investigation of the Trump Organization and its CFO, Allen Weisselberg. In the indictment, we allege, among other things, financial wrongdoing whereby the Trump Organization engaged in a scheme with Mr. Weisselberg to avoid paying taxes on certain compensation. This investigation will continue, and we will follow the facts and the law wherever they may lead."  -- Letitia James, New York Attorney General

November 14, 2018 Now a week after the historic 2018 election which witnessed the highest midterm voter participation in over 100 years, the country is still awaiting the outcome of a handful of...