Last night's Democratic presidential debate, in Houston, Texas provided a few of the distinguishing performances needed to sustain some of the contenders through to the next stage, but is unlikely to change the standings in what has become a three-person contest.

The Highlights
The candidates had the opportunity to define themselves in one minute opening statements, providing a preview of the topics to follow, including healthcare, the racial divide, gun violence, trade, criminal justice reform, immigration, Afghanistan, climate change, education and Donald Trump. 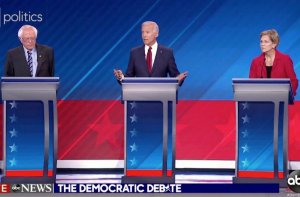 Sanders, Biden and Warren faced off on healthcare

Andrew Yang's "big" announcement at the outset, that his campaign would be providing $1,000 a month to 10 American families for a year to prove his "Freedom Dividend" theory, fell relatively flat as a transparent grab for the limelight.

By contrast, Kamala Harris focused on attacking President Trump in her opening, ending with "And now, President Trump, you can go back to watching Fox News" -- one of her best, albeit prepared, lines of the night.

Once again, healthcare dominated the evening, providing some of the more notable, if the only memorable, performances for some of the candidates.

Moderator George Stephanopoulous started with pitting Biden against Warren and Sanders, all three at center stage, asking, "Are they pushing too far?"

Biden wants to expand Obamacare to include a public option, while Warren and Sanders argue that Medicare-For-All would lower healthcare costs for the middle class.

Sanders' strongest performance came in the first half hour of the debate, when he ardently advocated for his all-in Medicare-For-All plan, noting again that he "wrote the damn bill."

Biden effectively challenged Sanders on the cost of his bill, saying, "My friend from Vermont thinks that employers are going to give money back to employees." Sanders: "Yes they will." Biden: "For a socialist, you have a lot more faith in corporate America than I do." 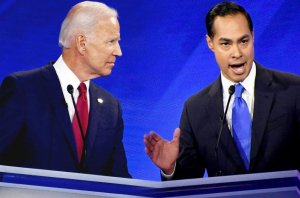 Sanders was less of a force, however, throughout the remainder of the debate when the contrast between the 78-year old Senator and some of the next-generation candidates seemed more pronounced.

The comment also reflected several nods to the former President, who remains enormously popular and who, for baffling reasons, became a subject of attack in the last debate.

The most heated exchange came between Julian Castro and Biden, when the former HUD Secretary said to Biden that, under his plan, people would "have to opt in, mine would be automatic. Barack Obama's vision was not to leave 10 million people uncovered...My plan would do that, your plan would not."

Castro followed with, "I'm fulfilling the legacy of Barack Obama, and you're not." Biden responded, "That'll be a surprise to him."

Pete Buttigieg weighed in, "This is why national debates are becoming unwatchable. This reminds everyone of what they can't stand about Washington. Scoring points against each other. Poking at each other, and telling each other that -- my plan, your plan." Castro: "That is an election. That is what we are here for." 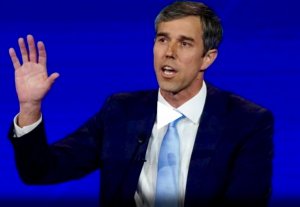 Gun violence was also a major topic, earning former El Paso Congressman Beto O'Rourke praise from his competitors on his handling of the tragic shooting in his hometown, while providing him a much-needed platform for reinvigorating his candidacy.

To commendator David Muir's question of "Are you taking away guns from people?," Beto passionately responded, "Hell yes, we are going to take your AR15, your AK47, we are not going to have it to be used against our fellow Americans anymore."

Senator Klobuchar countered with advocating "a voluntary buyback program...(but) if you want action now, we got to send a message to Mitch McConnell. We can't wait until one of us gets in the White House. We have to pass those bills right now to get this done."

A buoyant Cory Booker, who has made gun control "a central issue" in his campaign, said, "These mass shootings are tragedies, but the majority of the homicide victims come from neighborhoods like mine...We have had more people die due to gun violence in my lifetime than every single war in this country combined, from the Revolutionary War until now. This is not a side issue to me." 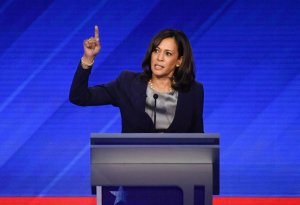 One of many one-liners by Harris: On gun violence and Trump, "he didn't pull the trigger, but he's certainly been tweeting out the ammunition" (Robyn Beck/AFP/Getty)

On Trump and trade, Senator Sanders said, "Donald Trump thinks that trade policy is a tweet at 3 o'clock in the morning."

Harris, who received less than remarkable reviews, was the most frequent Trump foe throughout the evening. Of the President's "erratic" trade policy, she said, "He reminds me of that guy in 'The Wizard of Oz,' you know, when you pull back the curtain, it's a really small dude?"

The candidates have a full month to capitalize on, or neutralize, the pending reaction of the 14 million television viewers who tuned in for the debate.

The DNC announced today that the fourth Democratic Presidential debate will take place at Otterbein University in Westerville, Ohio on October 15th, with the potential of a second night October 16th. The debate will be moderated by CNN's Anderson Cooper and Erin Burnett, and Marc Lacey of The New York Times.

DemList, as always, will keep you informed.

September 23, 2020 The crisis at hand: Not only is the nation reeling under the impact and mismanagement of the COVID crisis, but the economic fallout threatens to become a runaway train. We need...

April 2, 2018 Deadline: This Thursday, April 5th @5:00pm! to win primo baseball tix and help a good political cause. Many of you knew Paul Booth, one of our country’s greatest organizers and...