In tribute to the occasion, we are passing on words of wisdom from past Presidents and historic leaders, as laid out by Tom Blair, author of "What Would Ben Say?" in a full page ad in this week's Washington Post and New York Times.

Mr. President,
In anticipation of Presidents' Day consider
the following words of counsel and caution:

"Democracy is not so much a form of government as a set of principles." - President Woodrow Wilson

"A people that values its privileges above its principles soon loses both." - President Dwight Eisenhower

Facts are stubborn things; and whatever may be our wishes, our inclinations, or the dictates of our passions, they cannot alter the state of facts." - President John Adams

"You may give a man an Office, you cannot give him Discretion." - Ben Franklin

"When you single out any particular group of people for secondary citizenship status, that's a violation of basic human rights."  - President Jimmy Carter

"I think the first duty of society is justice." - Alexander Hamilton

"To announce that there must be no criticism of the President ... is morally treasonable to the American public." - President Theodore Roosevelt

"Let us not seek the Republican answer or the Democratic answer, but the right answer.  Let us not seek to fix the blame for the past, let us accept our own responsibility for the future." - President John F. Kennedy 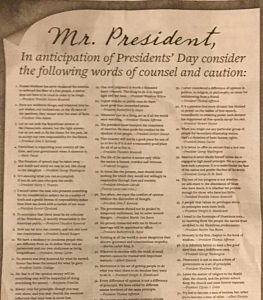 "America was not built on fear. America was built on courage, on imagination and an unbeatable determination to do the job at hand." - President Harry Truman

"No person connected with me by blood or marriage will be appointed to office." - President Rutherford Hayes

"Nothing in all the world is more dangerous than sincere ignorance and conscientious stupidity." - Martin Luther King. Jr.

"Always vote for principle, though you may vote alone, and you may cherish the sweetest reflection that your vote is never lost." - President John Quincy Adams

"In times like the present, men should utter nothing for which they would not willingly be responsible through time and eternity."  - President Abraham Lincoln

"No country upon earth ever had it more in its power to attain blessings than United America ... much to be regretted indeed would it be, were we to neglect the means and to depart from the road which Providence has pointed out to us so plainly; I cannot believe it will ever come to pass." - President George Washington

And to our readers: "I appeal to you again to constantly bear in mind that with you, and not with politicians, not with Presidents, not with office-seekers, but with you, is the question, 'Shall the Union and shall the liberties of this country be preserved?'"  - President Abraham Lincoln