On Sunday, in Las Vegas, a lone gunman opened fire with a semi-automatic rifle on a crowd of 22,000 concertgoers, killing 58 and injuring over 500 people.

The Route 91 Country Music Festival was on its third and final day, with country music star Jason Aldean performing the closing act, when Stephen Paddock began a 10-minute shooting spree from the 32nd floor of the Mandalay Bay Resort and Casino. 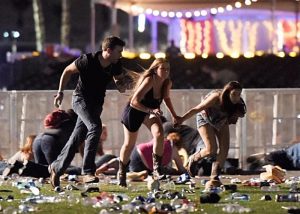 Concertgoers fled as the gunman fired

The tragic massacre, the largest in American history, is one of 156 mass shootings since 2009. Three of those took place in June of this year in Orlando, Florida; Alexandria, Virginia; and San Francisco, California.

Paddock, of Mesquite, Nevada, had amassed a small arsenal, with 23 firearms found in his hotel and over 20 more at his homes.

Twelve of the rifles in his hotel room were outfitted with a "bump-fire stock," which enables a semi-automatic to operate like a fully-automatic weapon -- releasing hundreds of rounds of ammunition per minute.

It is still unknown what motivated the 64 year old, who subsequently killed himself, to carry out the deadly assault.

The Law
The purchase of fully automatic weapons in the US has been restricted since the National Firearms Act of 1934, and the transfer or possession by civilians, prohibited since the law was amended in 1986.  The purchase and use of the transformative bump stock technology, however, has been legal since its introduction in 2010 by Slide Fire Solutions. 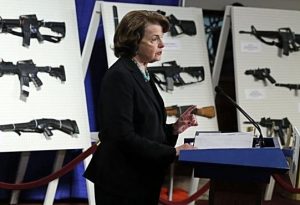 "Why can't we keep a weapon from becoming a military battlefield weapon?"

On Wednesday Senator Dianne Feinstein (CA), ranking Democrat on the Senate Judiciary Committee, introduced the Automatic Gun Fire Prevention Act, a bill to close that loophole and "ban the sale, transfer, importation, manufacture or possession of bump stocks, trigger cranks and similar accessories that accelerate a semi-automatic rifle's rate of fire ... Legitimate accessories used by hunters would be exempt. The bill also contains exceptions for lawful possession of these devices by law enforcement and the government."

Attempts in recent years to further regulate firearms, however, have been unsuccessful - hindered, in part, by a Republican held US House and the power of the National Rifle Association (NRA) - which claims approximately 1/5 of gunowners as members and boasts an annual budget of $250 million.

In 2016 the NRA spent an extimated $4 million on lobbying and direct political contributions, and $50+ million on political advocacy, including $30 million to help electTrump president.

Although individual states have passed gun control legislation, a divided US Supreme Court has rejected further registration restrictions on personal weapons - as recently as 2008.

Polling shows that Americans themselves are also divided on gun policy, with 51% saying it was more important to control gun ownership and 47% said protecting the right to own guns is more important. 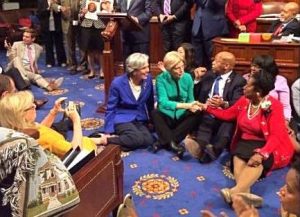 In 2016, 170 House Members staged a sit-in over gun control legislation

The debate, one of our nation's oldest and most contentious, will continue - as will tragedies like that in Las Vegas, until our laws change.

Until then, the United States stands alone on the international stage - with gun-related murder rates 25 times higher than other high-income nations.