Although the presidential is a federal office, candidates who jump into the race for the White House enter with varying advantages and disadvantages, based on their state laws.

Each state determines its own candidate filing deadlines for state office, for Congress, and for the presidential election, determining the level of risk to contenders throwing their hats into the ring.

Of the 24 major contenders for the Democratic nomination, 16 are current elected officials, 14 of whom are eligible for reelection to their current offices. 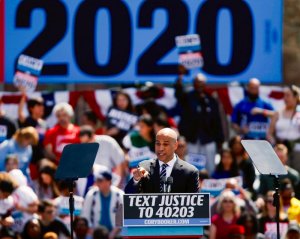 Under NJ law, Booker can run for Pres and Senate at same time (Getty)

Several of the candidates, including six of the seven US Senators, are not up for reelection for at least three years or more, freeing them of the immediate pressures of running for reelection and providing them with the ability to focus almost entirely on a presidential run.

Six candidates, however, are up for reelection in 2020, at the same time as the presidential, putting them in the position of, at some point, having to make a choice between relection or running for president -- either to preserve their seat or because of filing deadlines that impose a time-sensitive decision.

However, five of those candidates up for reelection, in California, Hawaii, Massachusetts, Ohio and New Jersey, are permitted under state law to run simultaneously for both their current federal office and president, providing a fallback if they are not successful in their presidential bid. 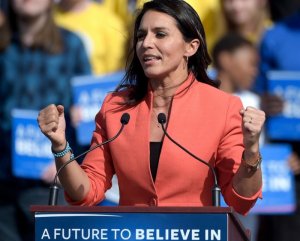 Gabbard. Hawaii has its own rules (HPN)

Hawaii, for example, allows exceptions for would-be presidents or vice presidents, but otherwise prohibits running simultaneously for more than one office.

The "LBJ law" is based on the 1959 change to previously restrictive Texas law, in order to allow Lyndon B. Johnson to seek both the vice presidency and re-election to his Senate seat in 1960.

Regardless, presidential contenders run a risk of incurring primary opponents in their current offices who are building a campaign against them as they get closer to the election. Gabbard and Moulton, for example, already have primary opposition for their congressional seats.

Current federal office holders who are running for president and drop out, also have the advantage of being able to transfer some of the funds raised from their presidential campaign to their US Senate, US House race, and in some cases, state campaign, as long as they do not exceed the aggregate limit of individual or PAC contribution between the two accounts. 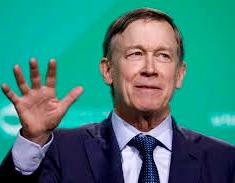 The remaining contenders and former office holders, while free to dedicate themselves full time to unseating President Trump, may be under other filing deadlines if they are considering dropping out and running for another elected office in their state.

Former Colorado Governor John Hickenlooper, for example, is being encouraged to leave the presidential contest and run against first-term Republican US Senator Cory Gardner in 2020.

Former Texas US Senate candidate Beto O'Rourke, who came within 3% of beating Republican incumbent Ted Cruz in 2018, is also being pushed to run against Texas Republican Senator John Cornyn in 2020.

SignUp for the Dailys for updates on the issues, politics and players