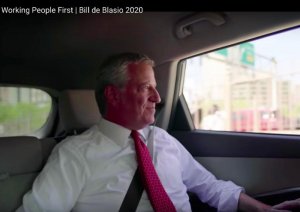 His mother served in the Office of War Information during World War II, and authored The Other Italy: The Italian Resistance in World War II (1988). His father worked as a contributing editor at Time Magazine.

In the 1950s, at the height of the "Red Scare," both parents were accused of being Communist sympathizers. They divorced when Bill was seven and he formally adopted his mother's surname after college.

De Blasio graduated from New York University, where he was a Truman Scholar, with a BA in Metropolitan Studies, and received his Masters in International Affairs from Columbia University.

His introduction to city politics came in 1989 working for David Dinkins' mayoral campaign. He later served as Congressman Charlie Rangel's 1994 campaign manager and, after a stint as Regional Director for the US Housing and Urban Development (HUD), managed Hillary Clinton's successful 2000 New York Senate bid.

In 1999, he was elected to District 15's Brooklyn School Board and in 2002, was elected to the New York City Council, representing the 39th district in Brooklyn until 2009. From 2010 to 2013, de Blasio served as New York City's elected public advocate before running successfully for Mayor in 2013. 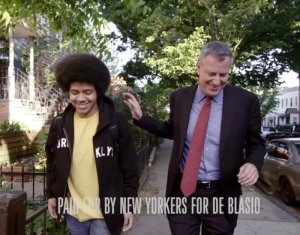 Mayor
In his first Mayoral election, de Blasio, who is six-foot-five, won a nine-way contest for the Democratic nomination to go on and beat Republican Joe Lhota by a landslide, 72.2% to 24%.

He has been married since 1994 to writer and editor Chirlane McCray, who is of Barbadian and St. Lucian descent. McCray, the Mayor's "closest advisor," has played an integral part in her husband's campaigns, as have their two children, Chiara and Dante.

A well-crafted ad featuring Dante, then 15 years old, addressed the city's stop-and-frisk policing policy, stagnant middle class wages and rising housing costs, identifying himself as de Blasio's son only at the end. "Bill de Blasio will be a mayor for every New Yorker, no matter where they live or what they look like, and I'd say that even if he weren't my Dad."

In his 2017 reelection, de Blasio won a second term with 66.5% of the vote, defeating Republican Nicole Malliotakis.

De Blasio's "Working People First" presidential campaign touts a series of accomplishments during his tenure as mayor, including universal Pre-K, guaranteed paid sick leave and his successful push for a $15 minimum wage.

As Mayor of the country's largest city, which is home to Donald Trump, de Blasio's espouses his unique position to "take Trump on." Trump has already taken the bait, tweeting insults following the announcement.

Reviews on de Blasio and his candidacy, however, are mixed on the homefront. In a March 27-April 1, 2019 Quinnipiac University poll, New York voters rated his job approval at 42 to 44%, but it varied significantly among demographics.

As a late entry into the race, he will have to make up for lost ground in both fundraising, and in introducing himself to Democrats outside New York. That includes voters in the early primary states like Iowa and South Carolina, where he is already campaigning this week.