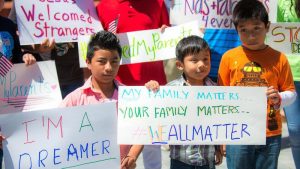 On Tuesday President Trump stripped away the rights of yet another sector of the American population -- leaving their work, education, families and future in this country hanging in the balance, and with Congress as their only lifeline.

The group: the 800,000+ "Dreamers" or young people who came to the United States illegally as children, and are currently protected from deportation under the Deferred Action for Childhood Arrivals or "DACA" program.

In a morning press conference Attorney General Jeff Sessions announced that the Trump Administration is rescinding DACA and its protections for "illegal aliens ...lawbreakers who have adversely impacted the wages and employment of native-born Americans." 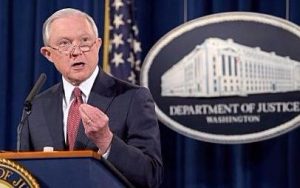 Congress to the Rescue?
Sessions also left the fate of Dreamers squarely in the hands of Congress, noting the six-month phase-out "will fulfill the desire of this administration to create a time period for Congress to act - should it so choose.

Obama instituted DACA by Executive Order after attempts to pass the comparable 2011 Dream Act in the Republican-controlled Congress failed.

Although DACA was implemented, Obama's subsequent 2014 efforts to expand benefits to parents of DACA recipients (DAPA) were blocked by the courts including, ultimately, a divided (4-4) Supreme Court.

A legislative resolution by Congress is imperative to save not only the Dreamers, but the lawmakers themselves -- as they face the 2018 mid-term elections under an erratic and unpopular president (56% Disapprove/Gallup) who has made yet another controversial decision. 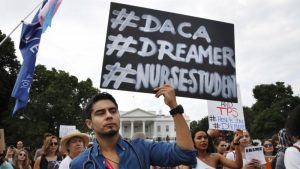 According to a new Politico/Morning Consult Poll (8/31-9/3), 76% of voters believe "Dreamers" should be allowed to stay in the US and become legal residents and two-thirds of self-identified Trump voters agree.

Congressional Members must also deal with the optics of deporting their own young constituents. While over half of DACA recipients reside in California or Texas, their presence extends nationwide. 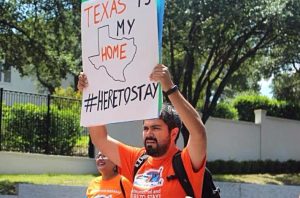 Over half of DACA recipients reside in Texas or California (Pic: TX AFL-CIO)

The (New) Dream Act
Several bills, including the Dream Act of 2017 (S.1615) introduced by Senators Dick Durbin (D-IL) and Lindsey Graham (R-SC) -- have already been submitted that provide many of the same protections as DACA, while also creating a path for citizenship or permanent legal resident status.

However Trump, who is still demanding "overall immigration reform" from a beleaguered Congress, has indicated he would not sign any of the current bills if passed. 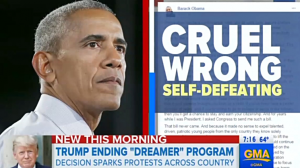 Legal Action
In addition to pubic outrage and immediate protests in NewYork, DC and cities nationwide, the DACA decision set off a wave of anticipated legal challenges.

A coalition of 15 states and D.C. filed a federal lawsuit in the Eastern District of New York on Wednesday, alleging the administration's actions violate due process and amounted to a discriminatory attempt "to punish and disparage people with Mexican roots," citing 78% of DACA recipients as born in Mexico.

While DACA is almost entirely self-funded by Dreamers' application fees ($495), and therefore not an appropriations issue, the consequences of ending DACA will be costly: an estimated $460.3 billion over the next decade, and a loss to the workforce of approximately 1,400 Dreamers every business day for two years.

What It Means for Dreamers Now
- The DACA program will be phased out over the next six months.
- DHS has stopped accepting DACA requests, but will consider pending applications on a case-by-case basis.
- Current DACA enrollees will remain in the program through their two-year benefits permit.
- Renewal requests will be considered for two-year work permits from current beneficiaries whose participation will expire by March 5, 2018 (if the request is submitted by October 5, 2017).

March 5, 2018
That leaves Congress, the courts and the public six months to act to preserve the program's protections before DACA beneficiaries begin losing their status.

How does your Legislator stand on Immigration Reform?