New York Governor Andrew Cuomo resigned from office yesterday, bringing to an end a storied career that at one point was thought to lead to the White House.

As with many politicians whose careers ended under the cloud of scandal, his demise was at his own hands.

Cuomo's resignation comes one week after the release of the New York Attorney General's independent investigation that concluded that he had "sexually harassed multiple women, and in doing so, violated federal and state law."

Investigators found the allegations, made by 11 women, to be credible and that their accounts had been corroborated to varying degrees. Investigators spoke to 179 individuals, and reviewed 74,000 pieces of evidence which, James said, painted a "deeply disturbing, yet clear picture."

The investigation is one of several that the state attorney general's office has launched into Cuomo and his inner circle in recent months. 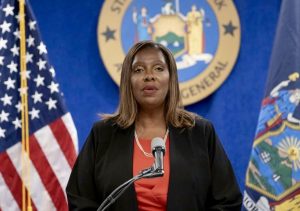 Also under investigation is whether Cuomo used official resources for the writing and rollout of his book, "American Crisis: Leadership Lessons from the COVID-19 Pandemic." The book highlights Cuomo's once-acclaimed national leadership in the handling of the coronavirus in New York, which was the epicenter of the pandemic.

Although Cuomo's decision to resign may have been designed to derail an impeachment proceeding, New York lawmakers are advocating for the process to move forward to prevent him from running for future office.

Legal scholars, however, say that, while investigations may continue, according to the state's constitution, Cuomo can't be impeached because he's resigned. There is reported ongoing debate among Members of the State Assembly's Judiciary Committee as to whether to move forward with the process, which could also cost the taxpayers as much as $10 million.

A Buffalo native, Hochul's grandparents fled poverty in Ireland and settled in western New York where her grandfather, father and uncles worked as steelworkers.

She earned her undergraduate degree from Syracuse University, and her law degree from Catholic University, followed by a stint as a legislative aide on Capitol Hill before going on to serve on the Hamburg Town Board and as the Erie County Clerk.

She was elected to Congress in a 2011 special election to fill the seat left vacant by the resignation of Republican Chris Lee, and served on the House Armed Services Committee and House Homeland Security Committees. The first Democrat to represent the 26th congressional district in 40 years, she was unseated the following year by Republican Chris Collins in the newly redistricted 27th CD, 51% to 49%. 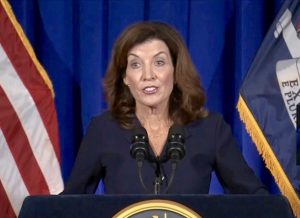 Hochul: "No one will ever describe my workplace as a toxic work environment" (ABC7)

Following Congress, she worked in government relations with Buffalo-based M&T Bank before being chosen by Cuomo as his running mate in the 2014 New York gubernatorial election.

Hochul successfully beat back a primary challenge by New York City Council member Jumaane Williams in 2018, 53.3%-46.7%, and she and Cuomo were reelected in the general election with close to 60% of the vote.

Hochul, who has long been an advocate for women facing domestic and sexual violence, led the governor's "Enough is Enough" campaign to fight sexual assault on college campuses. As the next in line to the Governor's mansion, she stayed out of the spotlight during the investigation, but after the AG's report, she tweeted a strong condemnation of Cuomo's behavior, adding, "No one is above the law."

September 1, 2021 The US Senate currently stands at 50 Democrats, including two Independents who caucus with the Democrats, to 50 Republicans. As Vice President Kamala Harris serves as the...