This morning the House Judiciary Committee announced two articles of impeachment against President Donald Trump for "high crimes and misdemeanors."

Committee Chairman Jerrold Nadler (D-NY) read off the charges of abuse of power and obstruction of Congress, stating that when Trump "puts himself before country," he "endangers the Constitution, he endangers our democracy and he endangers our national security."

Article One: Abuse of Power
"It is an impeachable offense for the president to exercise the powers of his public office to obtain an improper personal benefit while ignoring or injuring the national interest."

His actions included "corruptly soliciting the Government of Ukraine" for election assistance in pubic investigations to smear Trump's Democratic political rivals, and to further "a discredited theory promoted by Russia alleging Ukraine" was responsible for interference in the 2016 presidential election. 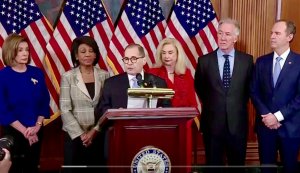 As leverage, Trump withheld the delivery of $391 million in security assistance and a White House meeting for Ukraine's president, actions that were "consistent with President Trump's previous invitations of foreign interference in US elections."

Article Two: Obstruction of Congress
In violation of the US House of Representatives "sole Power of Impeachment," President Trump subverted the Constitution by violating subpoenas for testimony and documents related to the Ukraine matter.

"Trump directed Executive Branch agencies, office and officials not to comply with those subpoenas," and thereby "engaged in unprecedented, categorical and indiscriminate defiance of the impeachment inquiry."

Although the Committee declined to charge Trump on his attempts to undermine Special Counsel Robert Mueller's investigation into Russian interference in the 2016 elections, the articles reference them in "Trump's previous efforts" to show a pattern of behavior.

This goes to the Democrats' case that by such conduct Trump "has demonstrated he will remain a threat to national security and the Constitution if allowed to remain in office," and, thus, impeachment cannot wait until after the election.

Next Steps
The Judiciary Committee will have a "markup," or vote, on the articles of impeachment this week, then recommend them to the full House of Representatives for a vote -- as early as next Tuesday.

If the House impeaches, the next stage is a trial in the US Senate in January, which would be overseen by US Supreme Court Chief Justice John Roberts.

According to a RealClearPolitics average of three major polls between November 21-December 9, 2019, 47% of Americans believe that Donald Trump should be impeached and removed from office. 47% don't. 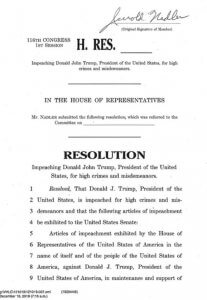 January 25, 2019 Day 35.  The impact of the Trump’s federal shutdown, the longest in US history, reached full crisis today — finally forcing the President to succumb to...