In the largest, and one of the bluest states this weekend, fourteen of the Democratic presidential contenders graced the same stage to make the case for why they should win the sunshine state's 416 democratic convention delegates.

At the California Democratic Party's annual convention, which took place at the Moscone Center in San Francisco, over half of the Democrats' 24 major contenders addressed a largely progressive audience eager to embrace those vying to defeat President Donald Trump in 2020. 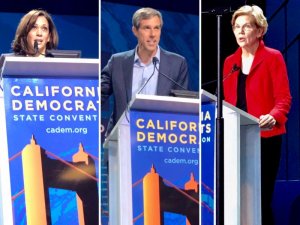 Noticeably absent was Joe Biden, who chose to forgo the larger audience for an LBGTQ event in the considerably smaller, but stategically important battleground state of Ohio.

While some may have considered it a snub by Biden, who leads in most national polls by at least 10%, others contend it was a shrewd move that further distinguishes him as the field frontrunner.

Biden's absence, however, provided an opportunity for some of his rivals to take subtle swipes at the former Vice President.

Bernie Sanders made reference to "those who have chosen for whatever reason not to be in this room," and Pete Buttigieg proclaimed, "A return to normal is not enough ... The riskiest thing we could do is try to play it safe." 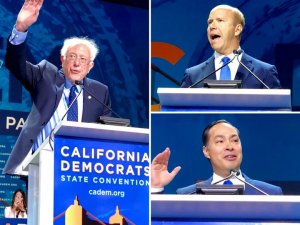 For the most part, however, the candidates utilized the platform to denounce the President and announce new policy ideas on everything from medicare, gun control and immigration, to climate change, taxes and tariffs.

Three of the candidates are from California, including current US Senator Kamala Harris, Congressman Eric Swalwell and author Marianne Williamson.

Although Harris as been elected three times statewide and is amassing endorsements from the state's elected officials, she is third in state polls behind the more nationally known Joe Biden and Bernie Sanders. 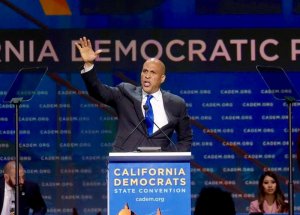 Cory Booker received a standing ovation: "It is time for us as a nation not to normalize ... the carnage of gun violence." (Jeff Chiu/AP)

US House Speaker Nancy Pelosi, who represents California's San-Francisco-based 12th District, spoke to her congressional constituents and party faithful, while addressing some chants of "Impeach."

Pelosi, who is trying to hold off the growing call to commence impeachment proceedings against President Trump until the completion of further investigations, said, "We will go where the facts lead us. We will insist on the truth. We will build an ironclad case to act." 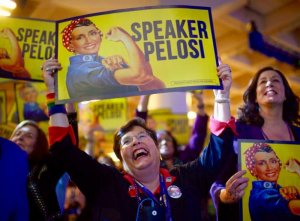 In addition to healing the internal turmoil, Hicks, who is President of the Los Angeles County Federation of Labor and a member of the American Federation of Teachers Local 1521, will have to steer the party through the 2020 elections when both the presidential and all 53 of California's Congressional Districts are up.