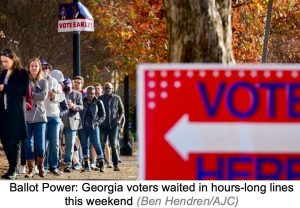 While the rest of the country enjoyed a post-election holiday reprieve, there was no rest for the weary in Georgia, where early voting began Saturday in the US Senate runoff -- now just over one week away.

Last Wednesday, the State Supreme Court unanimously rejected GOP attempts to block early voting on Saturday, paving the way for some 70,000 voters in nearly two dozen counties who headed to the polls that day. As of 3:30pm today, that number exceeded 207,000.

The heated contest between incumbent Senator and Reverend Raphael Warnock (D) and challenger and former Georgia Bulldogs football star Herschel Walker (R) is the last undecided Senate race of the 2022 midterms. Although Warnock led Walker by 37,675 votes out of close to four million cast in the November 8 election, neither candidate captured more than 50% of the vote, forcing the two into a December 6 runoff.

Although Democrats have secured control of the US Senate with 50 seats, the stakes are still high. A Warnock win would mean they would have an outright majority in the US Senate, allowing them to hold majority control of committees, instead of the power-sharing agreement currently in place.

Campaign fundraising filings with the Federal Election Commission (FEC) show that, as of November 16, Warnock had more than $29 million in cash on hand compared to Walker's $9.8 million.

According to AdImpact, which tracks advertising figures, candidates and groups from both parties have combined to spend $57.7 million on the runoff, including reserved ad space through December 6. Democrats are outspending Republicans by about $37.4 million to $20.2 million so far. Of that, Warnock's campaign has invested $18.1 million, while Walker has spent about $6.4 million. 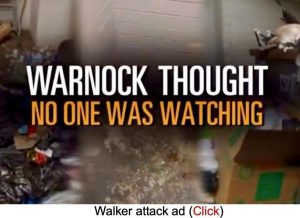 Notably absent from Walker's surrogates is former President Donald Trump, whose endorsement Walker embraced in the primary, but whose 52% disapproval rating among likely general election voters is a liability.

Walker is relying instead on newly reelected Governor Brian Kemp and his statewide operation to bring in independents and moderates. Kemp, who defeated Democratic challenger Stacey Abrams 53.4% to 45.9%, secured 200,000 more votes than Walker in November.

Democrats are counting on the same split-ticket battleline voters to support Warnock, who will be campaigning with popular former President Barack Obama in The Peach State this Thursday.