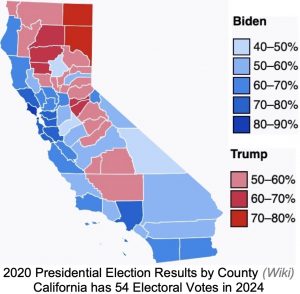 As the nation's most populous state, California has the largest Congressional delegation, with 52 US House representatives and two US Senators. In the Golden State, where Democrats outnumber Republicans by two to one, and which Joe Biden won by 30% in 2020, all statewide elected offices are currently held by Democrats.

Democrats currently hold 42 seats to the GOP's 10. There is one vacancy, in California's current 22nd Congressional District. 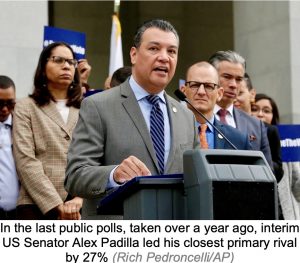 US SENATE: In the US Senate contest, voters will cast their ballots in two elections in the June 7 primaries for the same seat.

1) The first is for a special primary election to fulfill the remaining term of former Senator Kamala Harris, who vacated the seat to become Vice President. The winner of the special general election on November 8 will serve through the remainder of the 117th Congress, which ends January 3, 2023.

Former California Secretary of State Alex Padilla (D), who was appointed by Governor Gavin Newsom (D) as interim US Senator on December 22, 2020, has been representing the Golden State in the seat.

2) The second, regularly scheduled June 7 primary will be to select the top two candidates to run in the November 8 general election for a new, full six-year term, beginning with the 118th United States Congress on January 3, 2023. 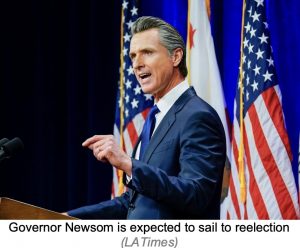 All told, six Democrats, 10 Republicans, and seven other candidates are running for US Senate, eight of which are on the ballot for both Senate elections. Padilla, who is running in both the special and the regular primary, is heavily favored to win both elections.

GOVERNOR: In the gubernatorial contest, first-term Governor Gavin Newsom, who was elected in 2018 with a landslide 62% of the vote, is running for reelection.

Although Newsom is facing over two dozen primary opponents, the incumbent is considered unbeatable. This was underscored by the resounding rejection of 62% of the voters in an election attempt to recall Gavin last September.

None of the major candidates who sought to replace Newsom in the recall election are running again. The most likely candidate to win the number two slot to advance to the general election are California GOP-endorsed State Senator Brian Dahle.

ATTORNEY GENERAL: Incumbent Rob Bonta (D), who was appointed to the position in March of 2021 after former AG Xavier Becerra was tapped for Biden's cabinet, is facing four challengers.

In the competitive primary, Republican former US Attorney Nathan Hockman and Sacramento County District Attorney Anne Marie Schubert, who is running as an independent, are the top contenders for the number two slot to advance to the general election. 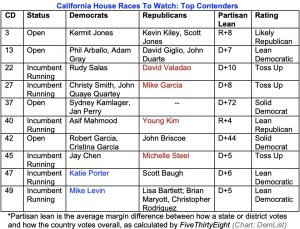 CONGRESS
In California, which lost one seat in redistricting, the independent Citizen Commission drew a new map similar to the old, creating what appeared to be 43 Democratic-leaning seats, seven Republican-leaning seats and two highly competitive seats. Since the final plan was approved last December, however, a number of seats have become more competitive.

Many of the districts were significantly redrawn, sometimes pitting incumbents against each other. ln the new open CD 13, which takes in parts of Congressman Josh Harder (D) and Jim Costa's (D) former districts, both members have opted to run elsewhere.

The new 42nd CD merged two districts: the 40th, represented by Democrat Lucille Roybal-Allard, and the 47th, represented by Democrat Alan Lowenthal. Both long-time incumbents are retiring, creating a heavily blue open seat where the race will come down to the top two Democrats. Similarly, the solidly Democratic 37th, being vacated by Congresswoman Karen Bass to run for Mayor of Los Angeles, will be a battle among Democrats. 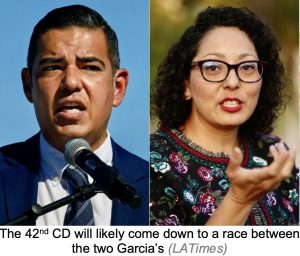 Nunes’ successor, however, is likely to only serve for a few months in Congress as the seat was essentially dismantled by redistricting.

Mayoral
The Los Angeles Mayors race is one of the most expensive elections in the country thanks to billionaire Republican-turned-Democrat Rick Caruso, who is in a tight race with Congresswoman Karen Bass. 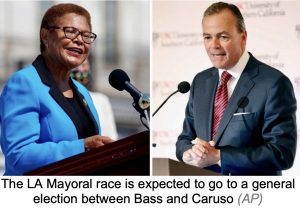 LA City Councilmember and former State Senate President Kevin de León and half a dozen other contenders are also in the race, but all lag far behind in polling.

San Francisco District Attorney Chesa Boudin is facing a high-profile recall election next Tuesday, and voters in San Jose, the third-largest city in California, will pick a new mayor.