Last night's Democratic primary debate, originally planned for Phoenix, Arizona, marked the first time a presidential debate has taken place without a live audience since the 1960 Kennedy-Nixon debate that initiated the medium. 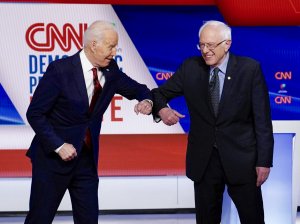 The much-anticipated one-on-one between Democratic frontrunners Joe Biden and Bernie Sanders came as the country is reeling from the worldwide devastation of the coronavirus, which has now infected close to 4,000 Americans.

Concern over the pandemic forced the change of debate venue to Washington, DC, where the two candidates faced off in front of CNN commentators Dana Bash and Jake Tapper, Univisions's Ilia Calderón, and a television and live streaming audience of 14.7 million.

Both candidates condemned President Trump's heavily-criticized handling of the crisis while attempting to project leadership to an anxious public that is increasing being forced into self-quarantine.

Sanders assailed Trump for "undermining the doctors and the scientists who are trying to help the American people. It is unacceptable for him to be blabbering with unfactual information," saying the first priority was to "shut this president up right now." 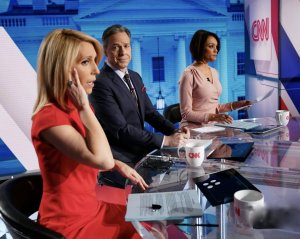 "This is bigger than any one of us. This calls for a national rallying of everybody together," said Biden, who assertively laid out his plan to address the outbreak.

In a swipe at Sanders, he said, "People are looking for results, not a revolution."

Both called for protection of American worker's wages and a commitment to free treatment for all, while pointing to the lack of preparedness for the national emergency under the current administration.

"The coronavirus pandemic exposes the incredible weakness and dysfunctionality of our current healthcare system, said Sanders, who advocates for a Medicare For All plan.

"How in God's name does it happen that we end up with 87 million people who are uninsured or underinsured?" Sanders repeatedly and passionately tried to assure viewers, "You don't worry, people of America...Do not worry about the cost of the healthcare that you're going to get, because we are a nation, a civilized democratic society. Everybody, rich and poor, middle-class, will get the care they need." 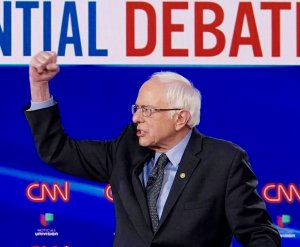 In what has become a common subject of debate between the two, Biden countered, "With all due respect to Medicare For All, you have a single-payer system in Italy. It doesn't work there. That would not solve the problem."

Amidst tangling over their combined decades of legislative votes, the candidates agreed that undocument immigrants in the country needed to feel safe to seek testing and treatment for the coronavirus. The subject of immigration is one of importance to Arizona and Florida, two of the now three states holding primaries this Tuesday.

This afternoon, Ohio Governor Mike DeWine (R) said the Ohio primary election, scheduled for tomorrow, would be postponed to June 2 because of concerns over the coronavirus.

The biggest takeaway of the evening was Biden's public commitment to picking a woman as a running mate (his earlier reference to Elizabeth Warren's bankruptcy reform plan, which Biden endorsed last week, did not go unnoticed). Biden has also vowed to appoint the first African American woman to the US Supreme Court. 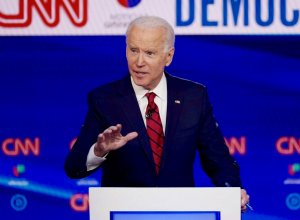 Sanders said "in all likelihood" he would also choose a woman running mate.

In a united focus on defeating President Trump, both candidates committed to campaigning for the other if they didn't win the nomination.

Although Sanders, like Biden, put in a strong debate performance, the event did not provide him with the pivot needed to change the current trajectory of the Democratic primary.

In a stunning turn of events, Joe Biden's sweeping victory in the February 29th South Carolina primary, and subsequent ten-state victory in March 3rd's Super Tuesday primaries, catapulted the former Vice President to the front of the field. In the two weeks since, four candidates have dropped out of the race and altogether eleven of his formal rivals have endorsed Biden.

According to the Associated Press, Biden currently leads the delegate count with 894 to Sanders' 743.