All gathered in Glasgow to address what, President Biden called "The challenge of our collective lifetimes, the existential threat to human existence as we know it."

COP26 was the 26th meeting of the Conference of Parties (COP), or signatories, to the United Nations Framework Convention on Climate Change (UNFCCC), held in Glasgow, Scotland October 31-November 13, 2021. The objective was to accelerate action towards the goals of the 2015 Paris Agreement, to reach global net-zero carbon emissions targets by mid-century, and to mobilize public and private funding support for those on the frontline of the climate crisis. 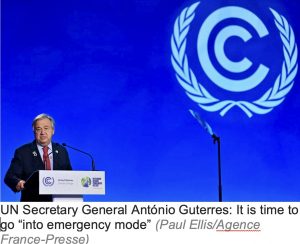 Why It Is Important
The final agreement, however, falls short of the conference's goal of the 2015 Paris Accord - to limit Earth warming to 1.5 degrees Celsius above preindustrial levels.

The past decade has witnessed the warmest global temperatures on record due to emissions from fossil fuels used by humans, like coal, oil and gas, causing climate change.

Scientists say that to go beyond a rise of 1.5C would unleash extreme weather events including crippling heatwaves, floods, massive storms and wildfires far worse than those the world is already suffering.

The pact, however, that governments made to curb greenhouse emissions between now and 2030 would put the world on pace to warm by roughly 2.4 degrees Celsius this century.

The end result, The Glasgow Climate Pact, according to UN Secretary-General António Guterres, is a compromise which “reflects the interests, the contradictions, and the state of political will in the world today.”

Guterres said, while the conference did not achieve all of its goals, "we have some building blocks for progress...to the young people, indigenous communities, women leaders, and all those leading the climate action army, I know you are disappointed. But the path of progress is not always a straight line. Sometimes there are detours. Sometimes there are ditches. But I know we can get there. We are in the fight of our lives, and this fight must be won. Never give up. Never retreat. Keep pushing forward.” 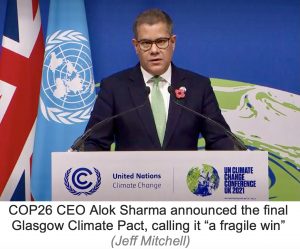 Deforestation
Leaders from more than 120 world countries, representing about 85% of the world's forests, pledged to halt and reverse deforestation by 2030. Trees can absorb vast amounts of carbon dioxide (CO2), one of the principal drivers of global warming.

Methane
Led by the US and the European Union, more than 100 countries agreed to cut 30% of current methane greenhouse gas emissions by 2030.

Methane, which is emitted from gas and oil wells, pipelines, livestock, and municipal landfill sites, is one of the most potent greenhouse gases and is currently responsible for a third of human-generated warming.

The Biden administration also announced that the Environmental Protection Agency would limit the methane coming from about one million oil and gas rigs across the United States.

The United States and China, the world's two biggest polluters, surprised summit delegates by announcing a joint agreement to "enhance ambition" to cut emissions this decade, and China committed for the first time to develop a plan to reduce methane. 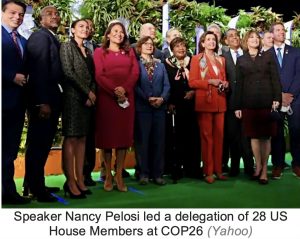 46 countries, 23 of which are making the commitment for the first time, agreed to shift away from coal, the dirtiest of fossil fuels and generator of CO2 emissions.

The International Energy Agency has said that if coal is not rapidly phased out the world has no hope of staying within 1.5C of global heating. To hit the target, at least 40% of the world’s existing 8,500 coal-fired power plants must be closed by 2030 and no new ones built.

One of the final negotiations, which extended the conference went into overtime last Saturday, was the language change in commitment by countries to “phase down” coal-fired power generation, softened from "phase-out" at the insistence of India.

For the first time, however, India, which is the world's fourth largest emitter of carbon dioxide after China, the US and the EU, has set an emissions target, promising to cut its emissions to net-zero by 2070.

While the US agreed to halt funding of "unabated" oil, gas and coal overseas, they did not agree to stop coal development, a nod many believe was in deference to members of Congress who represent coal-intensive parts of the country, like West Virginia, who regard the climate change negotiations as a threat to their region. 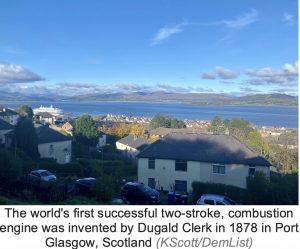 Green Transport: More than 100 national governments, cities, states and major car companies signed the Glasgow Declaration on Zero-Emission Cars and Vans to end the sale of internal combustion engines by 2035 in leading markets, and by 2040 worldwide. At least 13 nations also committed to end the sale of fossil fuel powered heavy duty vehicles by 2040.

Finance
One of the major objectives at the summit in Glasgow was how the world’s wealthiest nations, which are disproportionately responsible for global warming to date, should compensate poorer nations for the damages caused by rising temperatures.

Rich countries, including the United States, Canada, Japan and much of western Europe, account for approximately 12% of the global population today but are responsible for 50% of all the planet-warming greenhouse gases released from fossil fuels and industry over the past 170 years. 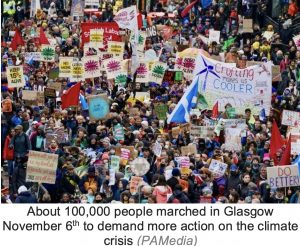 The COP also decided to establish a dialogue between parties, stakeholders and relevant organizations to support efforts to avert, minimize and address loss and damage associated with climate change.

The Rulebook also includes the Article 6 mechanisms, which set out the functioning of international carbon markets to support further global cooperation on emission reductions. 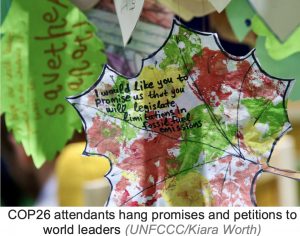 The Trump Administration released its 2018 federal budget plan, outlining a total $54 billion in cuts to federal spending – to offset the 10% increase in spending for Department of Defense...