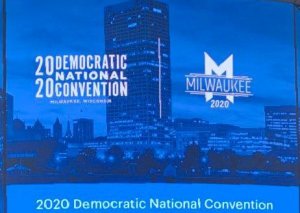 As the coronavirus crisis continues to escalate, with second-wave surges in states nationwide, so do restrictions on attendance at the Democratic Party's national convention, just one month away.

On Thursday, the Democratic National Convention Committee (DNCC) issued a directive to Members of Congress not to attend the convention, which kicks off August 17th in Milwaukee, Wisconsin.

Party leaders had already advised delegates not to plan to travel to Milwaukee as a part of their June 24th announcement that, while the quadrennial event would still be "anchored" in Milwaukee, all official convention business, including the presidential nomination, would be conducted remotely.

In April, the DNCC postponed the Convention, originally scheduled to take place July 13-16th, by five weeks due to the health risks imposed by the pandemic, which has now claimed the lives of close to 138,000 Americans.

Now, after two years in the making, the convention is scaled down from what was expected to be 50,000 participants to an estimated 1,000 in-person participants -- or less. Those who do attend will be subject to testing before being admitted to the Wisconsin Center, the main event venue. 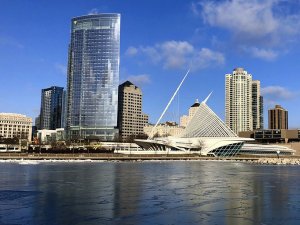 The midwestern battleground state, critical to the presidential election, was to have benefited from a $200 million infusion into its economy.

Milwaukee Mayor Tom Barrett told MSNBC that they are now expected "one tenth" of that amount.

Last week the Democratic National Committee (DNC) announced that voting on the nomination, as well as all party business, would be conducted virtually.

In a letter to state parties and convention delegates, DNC Secretary Jason Rae said that voting on convention business will be held in advance, beginning on August 3rd and will end on August 15th. All caucus and council meetings will also take place virtually.

Nevertheless, the show will go on, with Biden and the still-unknown Vice Presidential nominee accepting their nominations from Milwaukee. Instead of the usual rollout of speakers, elected officials, celebrities and rising political stars on stage, "Convention Across America" watchers can expect to see a high-quality series of satellite events from major cities, curated with performances, videos and stories from every-day-voters.

The Convention Calendar
In the interim, to help convention organizers, planners, participants and watchers during this unprecedented time, DemList is once again hosting the public convention calendar.

The Calendar is now open for your virtual event submissions, and will go live July 20th. 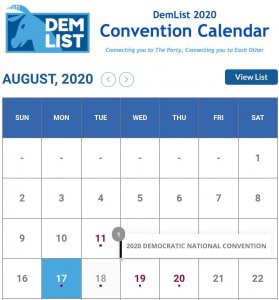 The Calendar is accessible to all who are SignedUp to follow DemList. We take no pass-thru cost or fee for any events. All contact and inquiries go directly to the event organizers.

Our goal is simply to provide a free and trusted resource to help promote the celebration of our platform and presidential ticket, while educating, informing and engaging the public in the process.

We will be working with the DNCC to post official convention activities as they become available, so it is a work in process, but the Daily column and calendar will be your central source for all things convention!