Americans are facing a potential new threat -- one that is global and now, at a cost, political.

It is the coronavirus, a dangerous contagent that has so far sickened more than 80,000 people in at least 33 countries, primarily in China.

What is a Coronavirus?

Origin & Timeline
The virus originated in the port city of Wuhan in China's central Hubei province in December, 2019.

January 7, 2020: The World Health Organization (WHO) announced they had identified the illness as a novel virus, dubbed 2COVID-19. They confirmed it is not a recurrence of the deadly SARS virus, which originated in China and killed more than 770 people worldwide in 2002-2003. 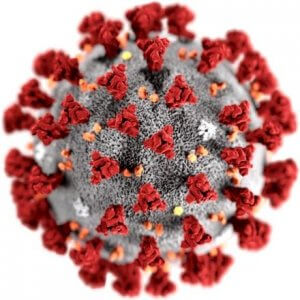 January 17th: Authorities in the United States, Nepal, France, Australia, Malaysia, Singapore, South Korea, Vietnam and Taiwan confirmed cases, and on January 30th, the WHO declared coronavirus as a global emergency, with infections in 19 countries.

New cases were confirmed in India, the Philippines, Canada, Germany, Japan, and the UAE.

February 2: The Philippines reported the first death outside China, a Chinese man from Wuhan.
February 4: The WHO reaffirmed there was "no known effective treatment" for the coronavirus.
February 8: The first reported US citizen died, in Wuhan, China.

February 11: One month after the first reported death from the virus, China's death toll reached 1,016, with 42,638 infections recorded.
February 14: Egypt became the first country in Africa to report a case 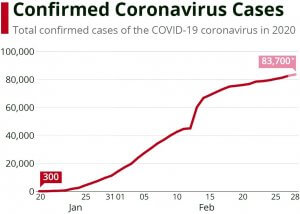 February 18: China's daily infection figures dropped below 2,000 for the first time, with the country's health commission reporting 1,868 deaths and 72,436 infections.

February 20: Russia banned entry for all Chinese citizens.
February 22: Outside of China, a total of 1,400 cases in 28 countries had been reported, including Italy, Iran and South Korea.

Administration Response
Under heavy fire by both parties for a lack of preparedness for the crisis, the Trump administration requested $2.5 billion in emergency funding. $1.25 billion of that would be new funding, with the remainder taken from existing health programs, including $535 million from fighting Ebola.

Senate Democrats, who have been calling for funding for weeks, countered with a request for $8.5 billion in entirely new emergency funding to combat the coronavirus. 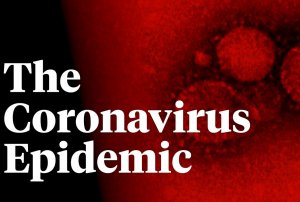 February 25 (Tuesday)
A behind-closed-doors briefing by the administration to the senators further ignited concerns. Senator Chris Murphy (D-CN) told The Hill that the administration's response to the virus was "frightening" and "will cost lives."

Nancy Messonnier, Director of the CDC's National Center for Immunization and Respiratory Diseases, said Tuesday, "Ultimately we expect we will see community spread in this country. It's not so much a question of if... but rather more a question of exactly when this will happen."

February 26 (Wednesday)
On Wednesday morning, Secretary of Heath and Human Services Alex Azar testified before the Senate Appropriations Subcommittee on the HHS's fiscal year 2021 budget request. Azar, who stated he would be directing the US response to coronavirus, answered a barrage of heated questions from both Republican and Democratic members.

His testimony came as the first case of coronavirus not tied to foreign travel was announced in California.

Acting Secretary of Homeland Security Chad Wolf also testified before the Senate on Wednesday, unable to answer the most basic of questions about the status of the US response plan. 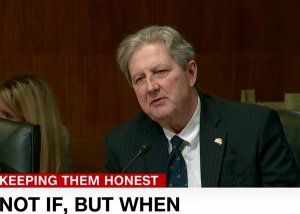 Republican Senator John Kennedy (LA) to Wolf: "You're the Secretary of Homeland Security. You are supposed to keep us safe" (CNN)

Wednesday evening, President Trump called a press conference to assuage the fears of the public and Wall Street, announcing he was putting Vice President Mike Pence in charge of the government's response to the public health threat.

Trump cited Pence's experience as Governor of Indiana in handling outbreaks. In fact, Pence's opposition to a clean needle exchange program is blamed for the worse HIV outbreak in the state's history.

Trump attempted to play down the immediate danger, saying the coronavirus is "very well under control in our country.... The people are getting better. They're all getting better. There is a very good chance you are not going to die."

Contradicting his own public health officials, Trump said "We're very close to a vaccine." In truth, experts have said it won't be available for one to one-and-a-half years.

February 27 (Thursday)
Despite Trump's assurances Wednesday, the Dow fell an additional 1,200 points on Thursday, the worst one-day drop in the stock market's history. 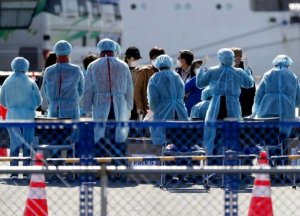 There have been six deaths anong the 700+ confirmed cases on the Diamond Princess Cruise Ship, quaranteed off Yokohama, Japan

A whistleblower employed at the Department of Health and Human Services (HHS) announced through her attorney that she is seeking federal protection after receiving retaliation for reporting that over a dozen workers sent to evacuate the first Americans from Wuhan, China, lacked proper training or appropriate protective gear.

The White House has announced that all public statements and appearances by government health officials and scientists must be cordinated through Vice President Pence's office.

February 28 (Friday)
According to the Center for Disease Control (CDC) the US has 62 confirmed COVID-19 cases, including 47 persons repatriated to the US.

The World Health Organization has rated the public risk assessment as "Very High" at the global level.

Resources
What You Need To Know: CDC on Coronavirus