At 7:00pm last night, House Impeachment Managers delivered the Article of Impeachment against former President Donald Trump to the US Senate, formally triggering preparations for the trial before the Upper Chamber, which will commence in two weeks.

Trump, who was impeached on charges of "Abuse of Power" and "Obstruction of Congress" on December 18, 2019, is the only president in US history to be impeached twice, and the only former President to facing trial after leaving office. 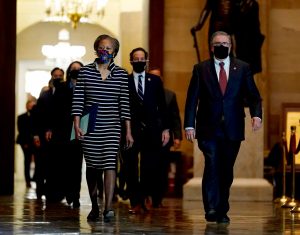 Incitement of Insurrection
The Article condemns President Trump for "willfully inciting violence against the Government of the United States" with a speech to supporters "that encouraged - and foreseeably resulted in - imminent lawless action at the Capitol."

In doing so, Trump "threatened the integrity of the democratic system, interfered with the peaceful transition of power, and imperiled a coordinate branch of government. He thereby betrayed his trust as President, to the manifest injury of the people of the United States."

The Process
Under the Constitution, the US House has the sole power to impeach, but "The Senate shall have the sole Power to try all Impeachments." 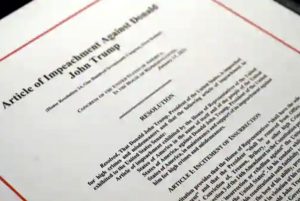 Similar to a regular court proceeding, now that the House has essentially indicted the President, the Senate will now conduct a trial to determine whether Trump is guilty and convicted.

The case against Trump will be presented by appointed "House Managers" or prosecutors, before all 100 US Senators, who serve as the jury. The President's lawyers will serve as the defense.

While the House impeachment required a simple majority vote, it will take a "supermajority" of 67 Senators to vote to convict Donald Trump. That means, if all 50 Democrats vote to convict Trump, 17 Republicans will need to vote for conviction for it to pass.

The Timeline
January 13th: The US House of Representatives impeaches Donald Trump for "Incitement of Insurrection" of the January 6th seige of the US Capitol. 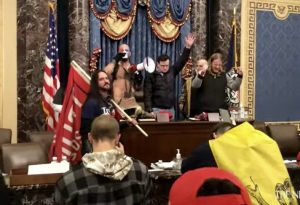 Rioters Take over Senate Chamber during Capitol Seige. In Senate trial, lawmakers are not only jury, but victims (Luke Mogelson/TheNewYorker)

January 25th: House Managers deliver Article of Impeachment to the US Senate.

January 26th: US Senators, who will serve as jurors, are sworn in for the trial, signing the oath book declaring their intent to serve as impartial jurors.

In an attempt to head off the proceedings, longtime Trump defender and conservative Republican Senator Rand Paul (KY), excercised a procedural "point of order" to call for a vote on the constitutionality of impeaching a former President.

Just five Republicans voted with the Dems to successfully table Rand Paul's motion, including moderates Susan Collins (ME) and Lisa Murkowski (AK), who are often swing votes, as well as Mitt Romney (UT), Ben Sasse (NE) and Pat Toomey (PA), who recently announced he will retire at the end of his term in 2022.

In a speech on the Senate floor, Majority Leader Chuck Schumer said, "The theory that the impeachment of a former official is unconstitutional is ... completely debunked by constitutional scholars from all across the political spectrum." 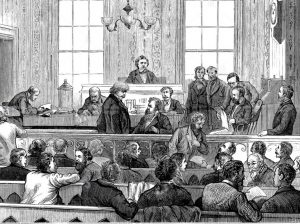 The Precedent: The Arraignment of General W.W. Belknap in 1876

As precedent, Schumer offered the 1876 corruption trial of President Ulysses Grant's Secretary of War, William Belknap. Despite having tendered his resignation before his impeachment by the House, the House still moved forward and the Senate subsequently ruled that Belknap could be convicted "for acts done as Secretary of War, not withstanding his resignation of said office."

Although the Senate rendered a majority vote against Belknap on all five articles, each vote fell short of the necessary two-thirds and he won acquittal.