On Monday, December 21st, Congress passed the much-awaited COVID relief package, a full eight months after the last wave of emergency funding for a country that has now witnessed 18.1 million coronavirus cases, including 320,000 deaths.

The 5,593-page legislation, which combines $900 billion in COVID-19 relief with a $1.4 trillion spending bill, is the first since April and comes as critical benefits were expect to expire for millions of Americans just days before Christmas. 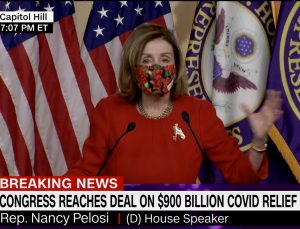 Pelosi: The bill is only a "first step" toward a broader aid package for all Americans

The Consolidated Appropriations Act of 2021, which now awaits President Trump's signature, passed the Senate by a 92-6 vote after the House approved it, 359-53.

Although the stimulus portion of the package is half the size of the $2.2 trillion stimulus law passed in March, it remains one of the largest allocation of federal resources in modern American history.

Those included a demand from Democrats for more money for cities and states, and financial relief for teachers and first responders. Republicans' push for liability protection for companies from Covid-19-related lawsuits was also left out of the bill.

The compromise was also pushed by President-elect Joe Biden, who said "it is far from perfect, but it does provide vital relief at a critical moment...this bill is just a downpayment in addressing the crisis. There's alot more work to do."

Highlights
The $900 billion pandemic relief portion of the bill, includes: 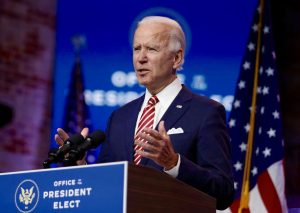 Biden: "Our Work is far from over." (Joe Raedle)

* $325 billion for small businesses, including $284 billion in forgivable loans via the Paycheck Protection Program
* $120 billion in extended unemployment benefits, at $300 per week through March 14th. It also extends employment benefits to self-employed individuals and gig workers
* $166 billion in Direct Relief, including $600 for Individuals making up to $75,000, $1,200 for couples making up to $150,000, with payments phased out for higher incomes, and an additional $600 payment for each dependent under 18
* $25 billion for a federal rent and eviction assistance program, including a $800 million is set aside for Native American housing entities. A federal eviction ban has been extended through the end of January
* $82 billion for schools and universities
* $69 billion total for public health measures, including vaccines, testing, and health providers
* $13 billion toward food stamps, including Supplemental Nutrition Assistance Program (SNAP) benefits
* $13 billion to the farming and ranching industry in the form of direct payments
* $10 billion for child care
* $10 billion for the US Postal Service 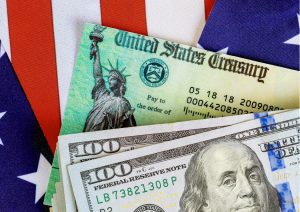 The omnibus spending portion of the appropriations bill, totalling $1.4 trillion, consists of $740.5 billion in defense spending and $664.5 billion for domestic programs, includes:

* Funding federal agencies through September 2021
* $45 billion for transportation, including for state transportation departments and Amtrak
* $35 billion for clean energy research and development
* $15 billion in small business loans specifically targeted to theaters and small venues
* $7 billion to expand broadband access for students, families and unemployed workers, including $300 million for rural broadband and $250 million for telehealth
* $5 million for the creation of a database to track police misconduct
* $2.3 billion for a second Virginia-class attack submarine
* $2 billion for Space Force
* $1.375 billion for the Mexico-United States border wall
* Provisions to rein-in surprise medical billing for emergency and scheduled care
* Tax credits for businesses that voluntarily provide paid leave
* Forgiveness of nearly $1.3 billion in federal loans to historically Black colleges and universities, and increasing the maximum Pell Grant amount 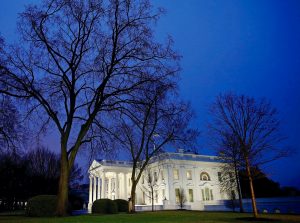 The sun will set on the Trump White House in 29 days! (AP)

* A 3% military pay raise, and preservation of a 1% pay raise for federal civilian employees next year
* Establishment of a United States consulate in Tibet
* Establishment of two new Smithsonian museums dedicated to Latinos and women
* A national park for West Virginia
* Banning the USPS from mailing electronic vaping products
* Establishment of an anti-doping program for horse racing
* Upholding the Hyde amendment, which prohibits federal funds from being used for abortions

The omnibus rejected a spending proposal from Trump which would have imposed significant cuts across federal agencies and institutions like the State Department, Environmental Protection Agency, the National Institutes for Health and National Endowment for the Arts.

Members of the House and Senate now head home for recess until Sunday, January 3rd, when the new 117th Congress will be sworn in.