Among the many unforeseen consequences of the coronavirus pandemic has been the collective impact of consumer spending, labor shortages and clogs in transportation that has resulted in a global supply chain crisis.

In commerce, a supply chain is a system of organizations, people, activities, information, and resources involved in supplying a product or service to a consumer.

A supply chain begins with the creation of a product, from the conversion of raw materials to manufacturing and component construction, to the assembly of a final product before moving it by air, sea, rail and/or ground to a store or directly to the consumer.

For goods to move from overseas factories to American homes, the oceangoing vessels, shipping containers, cargo terminals, truckers and railroads all must work together as a seamless operation to avoid any ripple or break in the chain.

During the pandemic, Americans changed their consumption patterns of goods and services, while shifting to more online spending, which was boosted further as the economy started to recover.

Services have always dominated, making up 70% of the US economy. While spending on personal services is still down, spending on goods was up by 20% in August of this year compared to August of two years ago, according to the Bureau of Economic Analysis.

The supply chain, however, which has already experienced setbacks at every stage of the pandemic, has not caught up to changes in consumer demand.

With the surge, particularly in imports from Asia, there has been a crush of cargo in our nation's ports, creating a huge bottleneck in transportation at ports like Los Angeles and Long Beach, which account for 40% of all cargo goods entering the US.

"Something like the python trying to swallow the alligator. That is the kind of volume we are trying to send through our ports right now." -- Thomas Goldsby, Supply Chain Expert on Meet the Press 10/17/21

On average, it now takes three times longer to clear vessels at the ports compared to before the pandemic.

Railyards are overwhelmed, in some cases with trains backed up for miles.

There are also labor shortages at every step of the supply chain, which has long experienced a lack of skilled warehouse workers and qualified truck drivers to move goods and services over land.

The financial impact is hitting retailers and consumers directly, who are seeing a rise in the cost of cars, TVs, gas, electronics, food and furniture. Inflation for the month of September was up 5.4%, the sharpest rise in 13 years.

A month after taking office, Biden issued an Executive Order "to strengthen the resilience of America’s supply chains," and directing the heads of agencies to consult "outside stakeholders -- such as those in industry, academia, non-governmental organizations, communities, labor unions, and State, local, and Tribal governments -- in order to fulfill the policy."

Last Wednesday, President Biden announced that after weeks of negotiation with major unions, retailers and freight movers, the Ports of Los Angeles would begin operating 24 hours a day, seven days a week. That follows the Port of Long Beach’s commitment to operating 24/7 two weeks earlier.

Biden said it is the first key step toward moving the country's entire freight transportation and logistical supply chain to 24/7 operations, a system under which most leading countries in the world already operate.

Biden noted that opening ports for longer hours is only part of the effort, "Because all of these goods won't move by themselves...we need major retailers who ordered the goods and the freight movers who take the goods from the ships to factories and stores to step up as well." 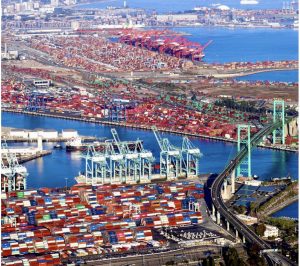 Executives from Walmart, FedEx, UPS and Target have also been a part of the negotiations and have committed to "ramp up their activities" to utilize off-peak hours at the ports.

The President also took the opportunity to plug his infrastructure plan, saying the best way to address the longstanding weaknesses in the transportation supply chain that the pandemic has exposed, is for Congress to pass the bill. The legislation includes money for roads, bridges and public transportation, and would also provide funds to reduce congestion and emissions near ports and airports.

Experts say, barring any additional disruptions like natural disasters or a greater resurgence in the pandemic, we can continue to see supply chain disruptions for up to another year as the US adjusts to the new norm.

"Our entire supply chain is built on efficiency, not resistance... As a consequence, whenever anything goes wrong, you are caught short. That is the lesson we have learned during this crisis with the pandemic. We have a supply chain that is set up for an economy that no longer exists. We are in a new world...There is no perfect solution to this problem, other than ending the pandemic."- Washington Post Global Economics Reporter David Lynch on GPS Fareed Zakaria 10/17/21

October 23, 2020 In the second presidential debate of the 2020 election, Joe Biden and Donald Trump went head-to-head on stage in Nashville, Tennessee Thursday night, sparring over issues and...

Dear Friends, Adventurers and Fellow Political Junkies! If you haven’t read it, I highly recommend Advance Man by Presidential campaign veteran Steven Jacques. A great read and gift for...