In a private ceremony, away from television cameras, Brett Kavanaugh was quitedly sworn in on Saturday as the US Supreme Court's 114th Justice.

His swearing-in came just hours after the US Senate voted 50-48 to confirm his nomination, one that will likely go down as the most controversial and contentious battles in the high court's history. 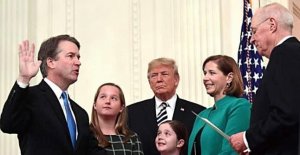 What started as a traditional ideological debate exploded into a a partisan circus following accusations by Dr. Christine Blasey Ford that Judge Kavanaugh had sexually assaulted her when they were in high school.

The firestorm that ensued further ignited a national debate on sexual misconduct already fueled by the #MeToo Movement, and became a referendum on each political party's handling of the issue as seen through the public eye of the Kavanaugh nomination hearings.

The full repercussions of Kavanaugh's confirmation, most immediately on the 2018 midterm elections and, in the long-term, his votes as a part of the now 5-4 conservative majority on the court, have yet to be realized.

Kavanaugh on the Court
Kavanaugh's pointedly partisan outbursts and less-than-judicial performance before the Senate Judiciary Committee, alarmed many legal experts who have called for a compromised Kavanaugh to recuse himself from certain cases before the court.

Kavanaugh's confirmation also prompted immediate calls for impeachment, a possibility should Democrats take control of the US House.  With Democrats Chairing the Committees, new investigations on Kavanaugh, and others, could be initiated.

Impeachment, for both a Supreme Court Justice and a President, requires a simple majority vote (50+) by the House of Representatives. Serving as an indictment, it then goes to the US Senate for conviction, which requires a two-thirds vote. 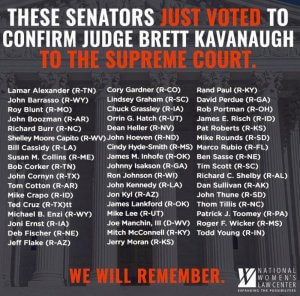 The challenge of securing the necessary 67 votes needed for a conviction would be daunting in a Senate with a near-even split, regardless of who is in control after November.

That fight, however, is considered a worthy one by more than a dozen organizations already organized and mobilizing to keep it alive through the election, and onto the agenda of the next Congress.

They are not alone. In a CNN/SRSS poll taken just prior to the Senate vote, 51% of Americans opposed Kavanaugh's confirmation, compared to 41% who supported him.

The still larger picture for some is the dark cloud that now looms over the credibility of the Supreme Court, one that is not expected to diminish in the eyes of the public, or the voters, anytime soon.

A Kavanaugh confirmation, said Senator Patrick Leahy (D-NY), would "forever change the Senate and our nation's highest court. It will politicize the US Supreme Court, a branch of government that should be above politics."

The Base and Bounce
Republicans wasted no time in declaring victory and claims of a reenergized base that will deliver for them Election Day -- now just 28 days away. 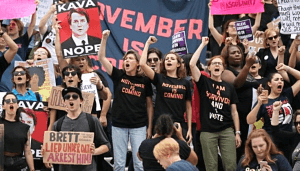 While Democrats are still favored to win back the US House, Republicans are counting on momentum from the "Brett Bounce" to ensure their slim majority, now at 51 to 49, in the US Senate.

The final vote may have also have dictated the fate of several red-state Democrats who needed to balance the wishes of a pro-Kavanaugh voting constituency against their own conviction to vote "No" for the bettermeant of the country.

In the end, the two most vulnerable went different ways. Senator Heidi Heitkamp (D-ND), who voted against Kavanaugh's nomination, has seen a drop in her re-election bid to 12 points behind her Republican challenger.

Senator Joe Manchin (D-WV), who is running for reelection in a state that voted for Trump by 42% in 2016, was the sole Democrat to vote in favor of Kavanaugh. Polling showed Manchin with a decreasing lead of just 4% over his GOP opponent a week prior to the vote.

At the same time a CBS News/YouGov poll released Sunday of surveyed voters in New Jersey, Texas, Arizona and Tennessee shows that 56% said their vote would not change if Kavanaugh were confirmed.

What we do know is that the Kavanaugh factor has helped close the gap between an already highly energized Democratic base, and a previously wanning GOP base.

As always, it will come down to who gets out to vote.