The US House began the business of the people Monday, kicking off what promises to be one of the most challenging and contentious congressional terms in modern history.

The opening of the 118th Congress was delayed for days following a chaotic and bitter battle over the election of Congressman Kevin McCarthy (R-CA) for Speaker of the House of Representatives.

While McCarthy ultimately prevailed early Saturday morning on the 15th ballot, his victory came at a high price -- at the cost of Congress and American voters.

Ousting the Speaker
A "motion to vacate" or remove the Speaker of the House previously required the support of at least half of the majority party to trigger a vote. Under new rules, a single rank-and-file lawmaker from either party will now be able to force a vote on ousting the House Speaker.

While the House still has the power to refer it first to a committee, if the motion makes it to a floor vote, it needs only a simple majority to pass.

Coveted Committee Assignments
In exchange for their support, McCarthy promised powerful committee assignments to the insurgent rebel Republicans, including the House Rules Committee which governs how bills are presented to the floor. The committee decides when and if a bill can be debated and whether amendments can be allowed. 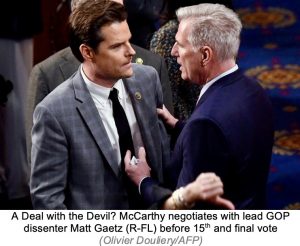 In retribution for Democrats stripping Marjorie Taylor Greene of her committee assignments for racist and threatening comments last term, McCarthy is also expected to strip key Democrats of some of their current committee positions. Among them, Congressman Adam Schiff (CA) who served on the Select Committee on Intelligence and on the January 6th Committee.

Select Committee on Weaponization of the Federal Government
McCarthy agreed to establish a new subcommittee to investigate the alleged “weaponization of the FBI,” as well as other agencies. The select committee would fall under the House Judiciary Committee, which will be chaired by Jim Jordan (R-OH) and would give lawmakers broad authority and subpoena power to investigate alleged misuse of law enforcement agencies that have pursued wrongdoing by conservatives, including former President Donald Trump.

Among the potential committee members - Scott Perry (PA), who, along with Jordan and McCarthy, was referred to the House Ethics Committee and the Justice Department for their part in the January 6th attack on the US Capitol.

The origins of the COVID pandemic and the role of former National Institute of Allergy and Infectious Diseases Director Anthony Fauci is also expected to be among the investigations. 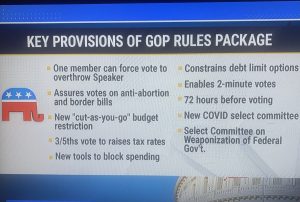 The Debt Ceiling
McCarthy has promised not to allow Congress to pass a budget resolution that includes a debt limit increase without some major cuts, likely in the form of reduced spending on Social Security and Medicare.

McCarthy also agreed to a plan that balances the federal budget within 10 years that does not include raising taxes. He pledged to allow spending bills to be considered under “open rules,” meaning any lawmaker can put to a vote an unlimited number of challenges and potentially gut certain pieces of legislation completely.

72 Hours
Another significant rules change: A requirement of 72 hours to review bills before they are brought to the floor -- a reaction to recent Democratic-lead spending packages that required quick passage before voting.

Republican Primaries
In exchange for the endorsement of the conservative anti-tax group Club for Growth, McCarthy agreed to a rules package that would allow rank-and-file members to have amendments brought to the floor.

Pivotal Issues
Votes have also been promised on bills relating to key sticking points for conservative lawmakers, including on border security and abortion, among other areas. 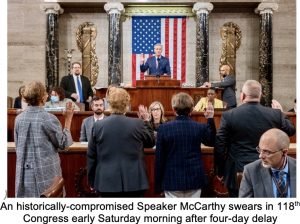 While the full extent of the concessions made to the GOP's hardline "MAGA Caucus" is still unclear, there is no question that the militant fringe of the party continues to have significant control over the future of the Republican party and its agenda.

DemDaily: A Walk in the Park