Americans across the country tuned into the much-anticipated testimony of former Federal Bureau of Investigation (FBI) Director James Comey before the Senate Intelligence Committee this morning.

Background
There are currently three investigations into the Russian government's efforts to influence the outcome of the 2016 presidential election, the role of Trump associates in that effort, and now the President's actions in attempting to suppress the investigation through the firing of the embattled FBI Director. 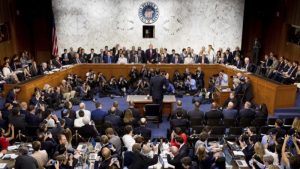 The Senate Select Committee on Intelligence
(announced January 13, 2017)
Goal: To investigate Russian intelligence activities during the 2016 U.S. election,"including any intelligence regarding links between Russia and individuals associated with political campaigns," and to produce a detailed, bipartisan report summing up what actions Russian operatives took in 2016 and how similar attacks can be prevented in future elections.

Goal: To investigate Russia's efforts to influence the 2016 presidential election and, as with the Senate, any collusion between Russia and Trump's campaign, and to produce a report that answers:
1. What did Russia do to influence the 2016 election?
2. Were there any links between Russian operatives "and individuals associated with political campaigns"?
3. How did the federal government respond to these efforts?
4. How and why was classified information leaked during this process?

The Department of Justice Special Counsel Investigation (announced May 17, 2017)
The appointment of former FBI Director Robert Mueller as Special Counsel was announced by Deputy Attorney General Rod Rosenstein three weeks ago (Attorney General Jeff Sessions earlier recused himself from the investigation due to potential conflict with his own communication with the Russians).

Goal: Mueller is charged with investigating "any links and/or coordination between the Russian government and individuals associated with the Campaign of President Donald Trump; and any matters that arose or may arise directly from the investigation." While Mueller will be in communication with the Committees, his actions will be much less public in keeping with confidential practices of the intelligence community.

The Escalation
In December, 2016 the Central Intelligence Agency (CIA) concluded that Russia intervened in the 2016 election, followed by then-President Obama's order of a detailed review of the Russian cyber-attacks.

On January 6, 2017 seventeen US Intelligence Agencies released a de-classified version of their report concluding that the election was "hacked" by the Russians in an attempt "to harm Hillary Clinton's chances and promote Donald J. Trump."

The Department of Justice's subsequent investigation was led by FBI Director James Comey, as head of the nation's top law enforcement agency, until his abrupt firing by President Trump on May 9th. The White House officially cited the President's "lack of confidence" in Comey and his "mishandling" of the 2016 investigation into Hillary Clinton's use of a private email server while Secretary of State as the reason -- but in a shocking admission, President Trump himself later declared it was because of the Russian investigation.

As a target of that investigation, Trump's intervention in the investigation set off a public firestorm, eventually forcing the hiring of the outside special counsel. 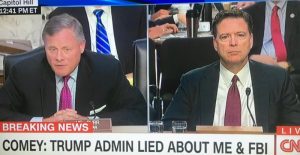 Today's Takeaways
Republicans are not defending the President. Committee Chair Richard Burr (R-NC) opened the hearing with a series of questions that set the stage for condemnation of Trump.

President Trump shocked Comey when he solicited, in a private dinner, a pledge of loyalty and a commitment to bury the investigation of former NSA Director Michael Flynn.

Comey made it clear that there was more to be revealed about the ties of Trump's "associates" to the Russia probe, including Attorney General Jeff Sessions. He deferred further explanation to the private session with the members of the Senate committee - to be held later in the afternoon.

Comey stated flately that the President's "lied" about his initial public reason for firing him, including accusations that Comey was undermining the morale of the agency.

Comey revealed he wrote detailed memos of his meetings with the President for fear Trump would lie about their conversations. He also admitted "leaking" information in an attempt to force appointment of a special counsel.

Comey came the closest yet to confirming President Trump is under investigation and that he expects the Special Counsel's investigation to include Trump's potential obstruction of justice.

DemList will keep you informed on all developments.

May 13, 2019 Alabama is poised to enact the most restrictive anti-abortion law in the country, one of a series of bills passed by states this year with the deliberate intent of setting up a...