Among the agenda items at the Democratic National Committee meeting in San Francisco, California this week is a series of resolutions regarding climate change.

For months advocates have demanded the DNC hold a presidential primary debate exclusively on the subject. 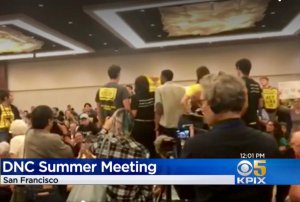 Advocates protested at Resolutions Committee: "We're asking you to fight for our futures!"

At the Resolutions Committee meeting this morning, organized activists from the Sunrise Movement and others disrupted the normally staid meeting, chanting a call for a Climate Debate, which would require rewriting party rules.

Resolutions is one of internal Party committees that governs the rules and operations of the DNC.

The scheduled two hour meeting lasted for over five hours, with many young protesters claiming that the DNC is not focused enough on the seriousness of the threat.

DNC Chairman Tom Perez has opposed any official single-issue debates that pit candidates each other on stage, advocating instead for outside groups to hold their own forums. CNN and MSNBC are hosting two presidential forums on the climate crisis in September.

After hours of demonstrations and discussion, the committee voted 17-to-8 against a DNC-sponsored climate debate, but unanimously approved the creation of an Environment and Climate Crisis Council.

In addition to council and regional caucuses, Friday's schedule will feature remarks from 13 of the 2020 Democratic presidential contenders. Each will be given eight minutes to make comments to the gathering of 447 DNC members from every state, the territories and Democrats Abroad. 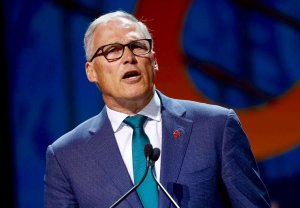 Absent from the Meet the Candidates session will be two contenders who dropped out of the race this week.

Former Colorado Governor John Hickenlooper has announced he will instead run for the US Senate against incumbent Republican Cory Gardner.

DemList, reporting in from the DNC meeting, will keep you informed.

Kimberly Scott
Publisher
DemList is a daily political column and resource dedicated to educating, informing and connecting the Democratic family. SignUp today.
Forward and Follow on Facebook, Twitter and LinkedIn

March 13, 2020 Worldwide, the coronavirus, a dangerous contagent that has reached pandemic levels, has so far sickened more than 142,100 people in at least 113 countries. According to The New York...