In the second presidential debate of the 2020 election, Joe Biden and Donald Trump went head-to-head on stage in Nashville, Tennessee Thursday night, sparring over issues and accusations in their final televised appearance together before the election - now just 11 days away. 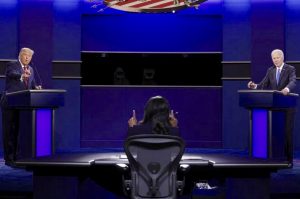 NBC's Kristen Welker moderated a considerably more civilized event compared to the September 29th chaotic first debate that resulted in the unprecedented imposition of new rules, including the threat of a muted mic, to keep the candidates, and specifically President Trump, in line.

The more disciplined format initially played to the advantage of the President, serving to reel in his behavior during his last opportunity before a major audience to influence Biden's 8-10 point lead in the polls.

The format did not, however, prevent Trump from unleashing a series of lies and distortions on issues from the coronavirus, climate change and racism to relations with our international allies and adversaries that sent fact-checkers flying.

The Highlights
On the Coronavirus Pandemic
Trump claimed he has saved thousands of lives because "as you know, 2.2 million people modeled out, were expected to die. We closed up the greatest economy in the world in order to fight this horrible disease that came from China."

Biden assailed Trump for a lack of a national plan, saying, "220,000 Americans dead. You hear nothing else I say tonight, hear this. Anyone who is responsible for not taking control... Anyone is responsible for that many deaths should not remain as president of the United States of America...a thousand deaths a day now. The expectation is we'll have another 200,000 Americans dead between now and the end of the year."

Trump: "Excuse me. I take full responsibility. It's not my fault that it came here. It's China's fault."

Despite all evidence to the contrary, Trump claimed that spikes in Florida, Arizona and Texas are now gone, that "99.9% of young people recover," and "We're rounding the corner. It's going away." 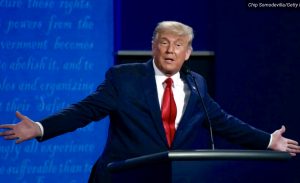 Biden: "There's not another serious scientist in the world who thinks it's going to be over soon."

On Trump's claim that, "We have a vaccine that's coming. It's ready. It's going to be announced within weeks. And it's going to be delivered," Welker said, "Your own officials say, 'It could take well into 2021 at the earliest for enough Americans to get vaccinated.' And even then they say, 'the country will be wearing masks and distancing into 2022.' Is your timeline realistic?"
Trump: "No, I think my timeline is going to be more accurate."

Biden: "This is the same fellow who told you, 'This is going to end by Easter' last time," (and) 'Don't worry, we're going to end this by the summer.' We're about to go into a dark winter, a dark winter and he has no clear plan."

On National Security and Taxes
On intelligence reports this week that confirmed that both Russia and Iran are again working to influence this election, Welker asked, "What would you do to put an end to this threat?"

Biden: "I made it clear that any country, no matter who it is, that interferes in American elections will pay a price. They will pay the price...I don't understand why this President is unwilling to take on Putin when he's actually paying bounties to kill American soldiers in Afghanistan, when he's engaged in activities that are trying to destabilize all of NATO...Why isn't that being done? Any country that interferes with us will, in fact, pay a price, because they're affecting our sovereignty." 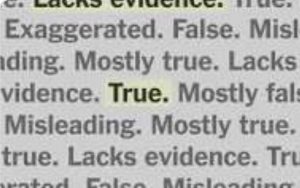 Trump: "Joe got $3.5 million from Russia and it came through Putin, because he was very friendly with the former mayor of Moscow and it was the mayor of Moscow's wife. And you got $3.5 million... I never got any money from Russia."
Biden: "I have not taken a penny from any foreign source ever in my life. We learned that this president paid 50 times the tax in China, as a secret bank account with China, does business in China."

When Welker asked Trump when he would release his taxes, Trump said, "I'm going to release them as soon as we can. I want to do it. And it'll show how successful, how great this company is...I prepaid millions and millions of dollars in taxes... I get treated worse than the tea party got treated... deep down in the IRS, they treat me horribly. We made a deal, it was all settled until I decided to run for president. I get treated very badly by the IRS, very unfairly."

On Immigration
On why the United States is unable to locate the parents of more than 500 children who were separated from parents at the U.S.-Mexico border by the Trump administration. 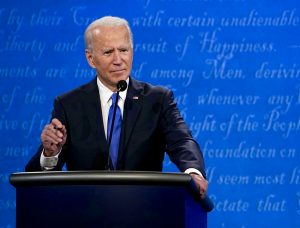 Trump: "The children are brought here by coyotes and lots of bad people, cartels, and they're brought here and they used to use them to get into our country. We now have as strong a border as we've ever had. We're over 400 miles of brand-new wall. You see the numbers. We let people in but they have to come in legally."

On Racism
Biden: "There is institutional racism in America. And we have always said, we've never lived up to it, that we hold these truths to be self-evident, all men and women are created equal. Well, guess what, we have never, ever lived up to it."

Biden: "Abraham Lincoln here is one of the most racist presidents we've had in modern history, he pours fuel on every single racist fire, every single one. Started off his campaign coming down the escalator saying he's getting rid of those Mexican rapists, he's banning Muslims because they're Muslims...He says to the Proud Boys, last time we were on stage here he said, 'I tell them to stand down and stand ready.' Come on, this guy has a dog whistle about as big as a foghorn." 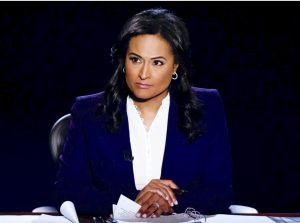 On Leadership
Welker asked each candidate what they would say, in their inaugural address, "to Americans who did not vote for you?

Trump: "Success is going to bring us together. We are on the road to success. But I'm cutting taxes, and he wants to raise everybody's taxes and he wants to put new regulations on everything. He will kill it. If he gets in, you will have a Depression, the likes of which you've never seen. Your 401(k)s will go to hell, and it'll be a very, very sad day for this country."

Decency, honor, respect. Treating people with dignity, making sure that everyone has an even chance. And I'm going to make sure you get that. You haven't been getting it the last four years."

SignUp for the Daily updates on the issues, the politics and the players.
Forward and Follow on Facebook, Twitter and LinkedIn
Check out the DemList Election Calendar for Biden-Harris events

President Obama sent a clear signal today that he has no intentions of staying on the sidelines in the final months of his Presidential term.