In a historic battle for Speaker of the US House of Representatives, Republicans were mired in chaos for over five hours on the opening day of Congress, recessing at 5:30pm this evening with the decision for the body's top post undecided.

The nomination of current GOP House Minority Leader Kevin McCarthy (CA), who has long positioned himself as the new speaker, failed repeatedly, going to three ballots -- the first time in 100 years the election has gone to multiple votes. 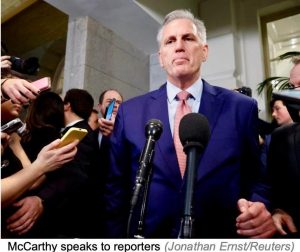 The election for Speaker is normally a formality as both parties traditionally elect their leadership within their own conference after the November elections.

While a united Democratic party unanimously chose five-term Congressman Hakeem Jeffries (NY) as their new Leader on November 30, 2022, McCarthy faced extreme opposition within his party from the outset by several hardline conservatives from the House Freedom Caucus.

While other leadership positions are established within each party, the speaker -- the only position mentioned in the Constitution -- is formally elected by the full 435-seat chamber on January 3, 2023, the day Congress is normally sworn in. While all members vote, the party in the majority with 218 or more seats is presumed to win the speakers race. 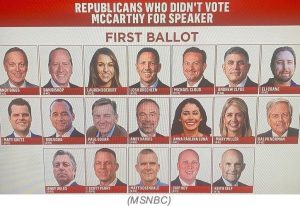 In the first ballot vote, all 212 Democrats voted for Jeffries, with 203 Republicans voting for McCarthy and 19 members voting for one of four other GOP colleagues, including Biggs and ultra-conservative Jim Jordan (OH), who supports McCarthy.

By the end of the third ballot, a 20th dissenter, Byron Donalds (FL) had joined the opposition to McCarthy.

The House is now adjourned until Wednesday, January 4 at noon, when a fourth round of voting will commence.

In the interim, McCarthy will have to strike additional bargains with at least 16 of his opposers, if possible, hopelessly compromising a legislative agenda already severely hindered by an unexpectedly close balance of power in the House.

Failing that scenario, which seems increasingly unlikely, McCarthy would need to step aside in favor of a consensus candidate like Steve Scalise (LA), who was unanimously chosen by his colleagues in November as Majority Leader, the party's second in command. Scalise has been unwavering in his support of McCarthy. 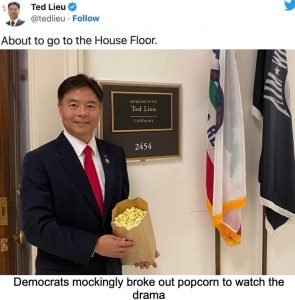 There is no statutory limit to the number of ballots that may be taken, so McCarthy could drag the election out for days, if not weeks.

In any case, the new Republican House majority is already setting records.