At 12:00pm Thursday, Judge Ketanji Brown Jackson was sworn in as the first Black woman to serve on the Supreme Court of the United States. 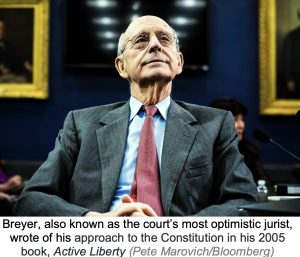 Jackson was sworn in by her predecessor, Justice Stephen Breyer, who has served with distinction on the High Court for three decades. Breyer, 83, who was appointed to the court in 1994 by then-President Bill Clinton, announced in January his plan to retire after the court's final opinions of the 2021-2022 term were issued.

A consistent liberal vote on the Supreme Court with an unflappable belief in the US system of government and a pragmatic view of the law, Breyer has sought to focus the law on how it could work for the average citizen.

In the minority of the court for much of his term, Breyer was known for his dissents as much as his concurring opinions.

He wrote an impassioned dissent in the 2007 Parents Involved in Community Schools vs. Seattle School District No. 1, in which the court struck down the school district's use of a race-conscious admissions policy in order to achieve integration.

He was a staunch defender of the right of legislative majorities, believing that judges should be very reluctant to strike down laws under debatable readings of the Constitution. His broad trust of legislatures, however, did not stop him from rejecting laws that sought to infringe on individual rights, as in Stenberg v. Carhart (2000), where he wrote for a 5-4 majority that concluded that a Nebraska law that limited abortion was unconstitutional. 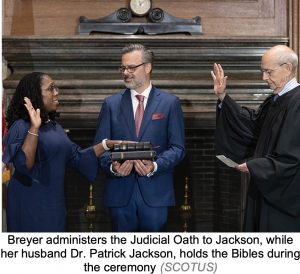 Last month, he joined fellow liberal justices Sonia Sotomayor and Elena Kagan in their dissent on the Court's overturning of federal abortion rights, saying the precedents in both Roe and Casey “were from the beginning, and are even more now, embedded in core constitutional concepts of individual freedom, and of the equal rights of citizens to decide on the shape of their lives.” The Court's reversal, they said, was for "one reason and one reason only: because the composition of this Court has changed.”

Breyer was also known as the Court's most outspoken opponent of the death penalty. In 2015, Breyer’s dissent in Glossip v. Gross asked the court to re-examine the constitutionality of the death penalty, which he felt constituted a legally prohibited ‘cruel and unusual punishment."

Jackson was confirmed 53 to 47 by the US Senate on April 7, 2022. The close vote was not a reflection of the brilliant jurist, deemed "imminently qualified" by the American Bar Association, but symbolic of the divisions in Congress that harshly demand adherence to party lines. 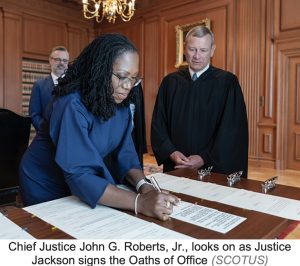 She also clerked for Breyer, whom she said "not only gave me the greatest job any young lawyer could ever hope to have, but he also exemplified every day in every way that a Supreme Court Justice can perform at the highest level of skill and integrity while also being guided by civility, grace, pragmatism and generosity of spirit."

On Thursday, Jackson took two oaths: The Constitutional oath, in which she affirmed she is bound to support the Constitution and that "no religious test shall ever be required as a qualification to any office," and the judicial oath, in which she vowed to administer justice impartially and faithfully, "without respect to persons, and do equal right to the poor and to the rich."

Of Jackson, Justice Breyer said, “Her hard work, integrity and intelligence have earned her a place on this court. I am glad for my fellow justices. They gain a colleague who is empathetic, thoughtful and collegial. I am glad for America.”

Jackson will take the bench with the start of the new judicial term, traditionally the first Monday in October.

The Countdown to the 2016 Presidential, just over one year away, has begun! For a one-stop, national and state-by-state run-down on important dates, Sign-Up for access to the free DemList...