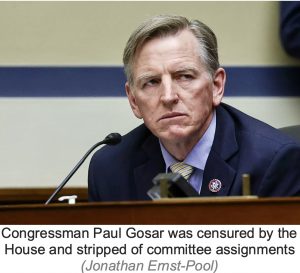 The US House of Representatives voted Wednesday to censure Congressman Paul Gosar (R-IN), rebuking him for posting a violent anime video to his official congressional social media accounts which showed him appearing to kill Congresswoman Alexandria Ocasio-Cortez (D-NY) and attacking President Joe Biden.

The resolution also strips the six-term Congressman of his two committee assignments, the first time a sitting House member has been censured in more than ten years.

Joining Democrats in the 223 to 207 vote were Republicans Adam Kinzinger (R-IL) and Liz Cheney (R-WY), who are also the only two Republicans on the January 6th Committee investigating the Capitol insurrection. GOP Congressman David Joyce (OH) voted present, meaning he took no position either way. 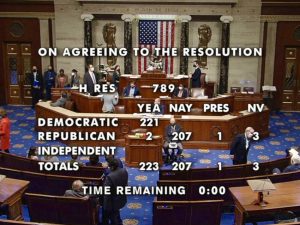 House Minority Leader Kevin McCarthy defended Gosar, saying the censure was all about Democrats' control of the US House. McCarthy proclaimed that if Republicans retake the majority in 2022, he will restore Gosar's committee assignments, as well as those of Congresswoman Marjorie Taylor Greene (R-GA), who was stripped of her committee positions in response to her own incendiary statements and endorsements of political violence earlier this year.

As Gosar stood in the well of the House chamber awaiting the reading of the resolution, fellow GOP members patted him on the back and joked with him. Speaker Nancy Pelosi later said it was "stunning" and "sad" that the violent video was a source of humor for the GOP.

The censure resolution condemned Gosar's use of "resources of the House of Representatives to further violence against elected officials," and condemned his "hateful and false rhetoric," as well as the failure of the Republican Party leadership to hold Gosar's "threats of violence against the President of the United States and a fellow Member of Congress."

The resolution further stated that "depictions of violence can foment actual violence and jeopardize the safety of elected officials, as witnessed in this chamber on January 6, 2021" and that "violence against women in politics is a global phenomenon meant to silence women and discourage them from seeking positions of authority and participating in public life, with women of color disproportionately impacted." 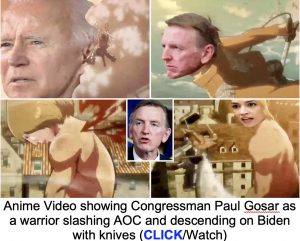 Twitter flagged Gosar's video, which was posted November 8th, as violating its rules about hateful conduct, but determined "it may be in the public's interest for the Tweet to remain accessible."

Gosar, a conservative who is one of former President Trump's biggest defenders, said in a statement that he doesn't "espouse violence or harm towards any member of Congress or Mr. Biden," saying the video "symbolizes the battle for the soul of America." 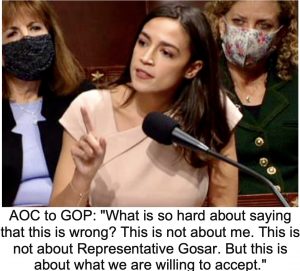 Gosar, who voted against certifying the election for Biden, has a long history of controversial statements. In 2017, he promoted the conspiracy theory that the white supremacist rally in Charlottesville, Virginia was a plot by the left. More recently, he said that rioter Ashli Babbitt, who was shot at the Capitol on January 6th, had been "executed" by the Capitol Police who were "lying in wait and then gave no warning before killing her."

Gosar's detractors include his own family. In 2018, six of Gosar's siblings released a video endorsing Gosar's opponent, speaking out against their brother's record.

Of yesterday's censure, Jennifer Gosar, his sister, said she was pleased and that she hopes “this is not the end” of his punishment, calling her brother’s "sinister" video depicting him assassinating Ocasio-Cortez (D-NY) “bone-chilling.” She also pointed out that this is not the first time her brother has threatened the life of Ocasio-Cortez and Biden, citing a 2016 animated "death note" video he previously released.
Within an hour of his censure by the United States House of Representatives, Congressman Paul Gosar retweeted the video.