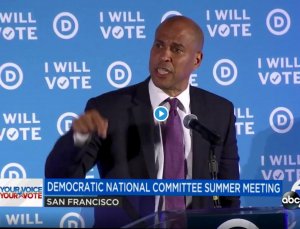 Cory Booker spoke at I Will Vote Gala

Following a day of council meetings and caucuses, Democrats ventured to San Francisco's famous Fairmont Hotel Thursday night to hobnob and celebrate with fellow delegates and donors at the DNC's I Will Vote Gala.

Then this morning, in characteristic fashion, DNC Chair Tom Perez kicked off day two of the DNC's Summer Meeting with a rousing speech touching on the Party's major platform issues.

Nancy Pelosi reminded us why she is one of the country's most powerful and capable women with an inspiring speech following a 10 minute video tribute to her "bawdass" accomplishments. 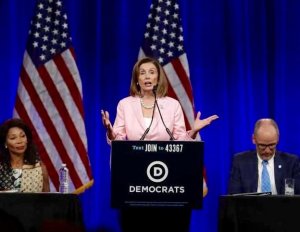 All was dwarfed, however, by the passionate dialogue and delivery of Reverend Dr. William Barber, a favorite at DNC gatherings.

Then thirteen presidential candidates took the stage, one-by-one before the 447 DNC members, along with hundreds of guests and press. The 5 hours courtship included eight minute appeals by each candidate amidst cheering, clapping and dramatic pauses. 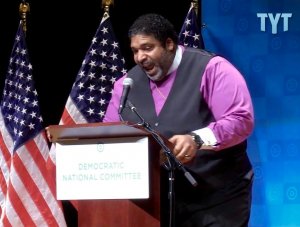 Rev Dr. William Barber brought down the House, "When we join hands..."

Congressman Seth Moulton utilized the opportunity to get in a final few words about the issues before  announcing he was withdrawing from the presidential contest, and would be instead running for reelection to his congressional seat in Massachusetts.

This evening the DNC officially welcomes its members and guests at a reception before wrapping up tomorrow with the regional caucuses and the General Session.

Among the topics of discussion -- next year's Democratic Convention, scheduled for July 13th-16th in Milwaukee.

DemList is a daily political column and resource dedicated to educating, informing and connecting the Democratic family. SignUp today.
Forward and Follow on Facebook, Twitter and LinkedIn