Attacks on the rights of our country's citizens and non-citizen residents, have been at the center of the Trump Administration's agenda.

Few issues have been more debated or threatened, however, than immigration, and the status of non-citizens currently living in, and attempting to immigrate to, the United States.

The advantages of citizenship include the right to vote, hold certain government jobs, receive federal financial aide and obtain a US passport to travel freely to and from the US without threat of deportation. 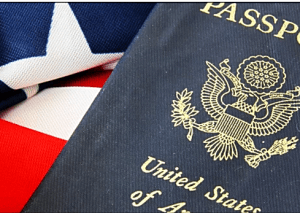 Citizens also receive preferential treatment on petitions to have immediate relatives immigrate to the US.

People can become US citizens by birth in the United States, through US citizen parents (depending on current law), or through the process known as naturalization.

So what does it takes to become a US citizen?

General Requirements
To apply for citizenship or "naturalization," an individual must be at least 18 years old, be a permanent resident (have a "Green Card") for at least five years and show that he or she has lived for at least 3 months in the state or territory where they apply.

The applicant must be able to read, write, and speak basic English, have a basic understanding of US history, government and the ideals of the US Constitution, and be a "person of good moral character."

If eligible, an individual submits a form N-400 Application for Naturalization for a one-time cost of $725, is interviewed and, if accepted, takes an Oath of Allegiance to the United States. 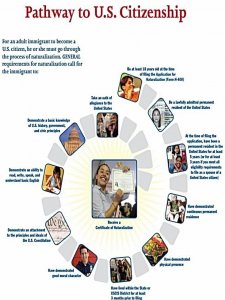 The full process, after the five-year green card residence requirement, may take from three months to two years, depending on location and the number of people waiting for approval.

In June, the United States Citizenship and Immigration Services (USCIS) announced that non-citizens who apply for a "benefit," such as an extension or change of status, a green card, or citizenship, would be placed in deportation proceedings if that benefit is denied.

For years, a criminal conviction has been required for immediate deportation. Now, merely losing your petition for a visa extension, being charged with a crime, or doing something the Department of Homeland Security (DHS) considers to be criminal, places you on the fast-track to deportation.

In March of this year the US Department of Commerce, which oversees the Census Bureau, announced plans to include a citizenship question in the upcoming US census.  The 2020 census questionnaire will include age, sex, Hispanic origin, race, relationship, home ownership status, and citizenship status.

Opponents claim it will suppress participation by immigrants and non-citizens who would distrust the confidential use of the information provided, resulting in inaccurate data on minority communities.

The addition of the citizenship question will also cost taxpayers an estimated $27.5 million in cost. The matter is being challenged in court by more than two dozen states and cities.

Related
DemDaily: Con-Census on the Question 3/29/18
Learn Liberty: The Constitutional Rights of Non-Citizens