Coming off critical victories in the two 2017 Gubernatorial races in Virginia and New Jersey, Democrats must now turn to the 2018 cycle - and the daunting 36 Governors' races up next year.

Brown, who has a 53+% approval rating, was previously elected as the state's 34th Governor from 1975 to 1983, making him California's longest serving Governor.

California voted Democrat in all five presidential elections between 2000 and 2016 and, with a 19-point voter registration edge over Republicans, the seat is very likely to stay in the hands of Democrats, leaving a scramble among those who have longed dreamed of succeeding the popular incumbent. 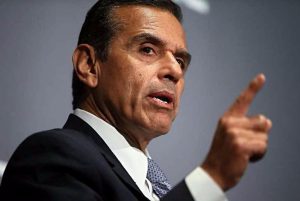 In California's open primary, which will be held on June 5, 2018, the top two vote-getters, regardless of party, advance to the November 6th general election.  This also sets up the potential for a showdown between two top Democrats.

Although candidates have until next March to file, there are already at least 25 contenders expected to run and more undecided candidates, like billionaire activist Tom Steyer, who are still on the fence but could shake up the race.

Of the current field, to follow are the most formidable contenders. 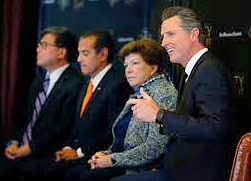 The Public Policy Institute of California (Nov 10-19th, ±3.4% margin of error) released a poll this week showing that Newsom leads the field with 23% of the vote to Villaraigosa's 18%.

That is a 5% cut in Newsom's 10-point lead in a USC Dornsife/Los Angeles Times poll (Oct 27-Nov. 6, ±4% margin of error) taken five weeks ago, and a 16-point advantage Newson held in a UC Berkeley poll taken in September.

However it plays out, this is one race worth watching. DemList will keep you informed!

May 19, 2017 It was the summer of 1964 and over one thousand out-of-state volunteers traveled to Mississippi to help register African-American voters and set up “Freedom Schools” in...