Between now and the election, DemList will continue to roll out voter protection and information resources. We will also, as always, try to explain what it all means and why it is important.

The coronavirus has upended the traditional voting process, with more than 33 million US citizens having already cast their vote. Whether voting early in person or at the ballot box election day, it is critical to know the laws in your state to make sure your vote is counted. 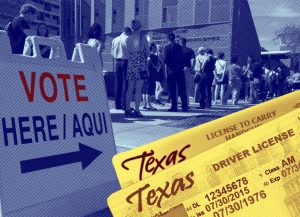 In Texas, a Handgun License is acceptable ID, but a student ID is not (ACLUTexas)

Identification requirements for voting have been a part of the electoral system for almost 70 years, but remain one of the most contentious and contested aspects of election policy today.

Advocates maintain it is necessary to prevent fraud at the polls, while opponents argue the laws are costly and used as a tool to disenfranchise eligible voters - most adversely racial and ethnic minorities, low-income, elderly and handicapped voters.

Voter Identification (ID) Laws for In-Person Voting fall into two categories: Photo v. Non-Photo Identification, and within those two, Strict or Non-Strict. Within each category individual states make exceptions for those voters who don't have a photo ID. 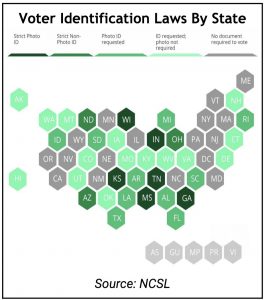 Exceptions include religious objection to being photographed (AR, IN, KS, MS, SC, TN, TX, WI), are indigent (IN, TN), "have a reasonable impediment" to getting an ID (SC), do not have an ID as a result of a recent natural disaster (TX), and for victims of domestic abuse, sexual assault or stalking who have a "confidential listing" (WI).

Strict States: In states with strict ID laws, a voter must present identification in order to cast a valid ballot, such as a driver's license, government or state-issued ID, military ID or tribal ID.

Voters unable to show ID are given a provisional ballot, to return within a designated time period with acceptable ID or their ballot will not be counted.

Non-Strict States: Exceptions to a required photo ID are allowed, but vary greatly by state. Exceptions may include signing an affidavit, having a poll worker vouch for voter, producing bank or billing statements, and having election officials verify a voter's identity after the vote is cast, or having the voter return an inquiry mailed to their reported address. 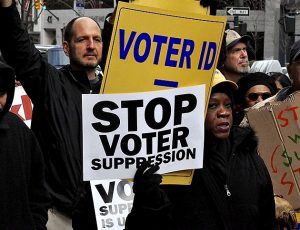