Now one year away from the 2020 presidential election, voters delivered critical statewide and legislative victories to Democrats in yesterday's elections that bode well for Democrats next November.

The triumphant flipping of the Kentucky Governor's office and both legislative chambers in Virginia are a bruising referendum on the White House and a public rebuke of its chief occupant.

In a rejection of the Bevin, one of the country's most unpopular governors and a close ally of Donald Trump, who campaigned in the Bluegrass State the night before the election, Kentucky's traditionally conservative suburban voters appeared to cast the key votes.

The battle between Bevin and bitter rival Beshear, who served as state Attorney General for the last four years and is son of popular former Governor Steve Beshear, has been the focus of national attention as a test of a divisive President in a tight red-state race. 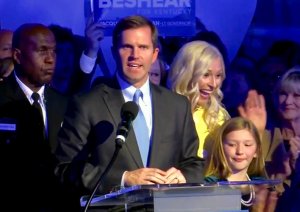 The Republican Governors Association spent millions of media dollars in the contest, and Vice President Mike Pence spent part of last week on a bus tour with the first-term governor.

Although other statewide officeson the ballot went to the GOP, a preliminary breakdown of the numbers shows the once-reliable votes in suburban areas helped deliver the Governor's mansion to Beshear.

With 5,300 votes separating them, however, Bevin has so far refused to concede, requesting a recanvass of the election results Wednesday.

Kentucky's current Secretary of State, Alison Lundergan Grimes (D), scheduled the recanvass, which is a check of the vote count, for November 14. There is no mandatory recount law in Kentucky.

VIRGINIA
Voters in the Old Dominion sealed the state's final tranformation to solidly blue by flipping both legislative chambers to Democrats, giving them their first trifecta since 1994. 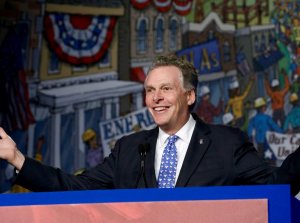 Democrats took control of the State Senate 21-19, and the State House 53-43, with some races still undecided.

Although Virginia has voted Republican in the presidential race since 1968, shifting demographics and rapid population growth over the last decade thrust the state into the battleground category.

Similarly, Democrats have won every statewide election since 2009, but the GOP's media assaults on past controversies surrounding the Governor and state officials threatened Tuesday's outcome.

Going into Tuesday's election, however, Democrats had a significant fundraising and voter enthusiam advantage, in part due to the efforts of popular former Governor Terry McAuliffe, who has once again become the face of the party.

Early voting numbers indicated that, compared to 2015, voter turnout was up in every age category, including an increase of 300% among 18-29 year olds, a key swing demographic.

Women lawmakers, who were elected in record numbers to the legislature in 2017, also were a part of the sweep on Tuesday. Among the new members are Democrat Shelly Simonds, who lost a tied House race in 2017 to a random draw, and Ghazala Hashmi, the first Muslim woman elected to the Virginia Senate. 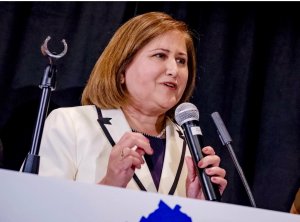 Ultimately it appears voters' distaste for Trump, who has a 37% approval rating in the state, won the day with a large defection of suburban voters choosing to unseat GOP incumbents.

Although Mississippi is one of the country's most conservative and poorest states, Hood was considered a strong candidate who had won statewide four times, giving Democrats hope -- for the future, if not this year.

August 12, 2021 Last Friday marked the 56th anniversary of the 1965 Voting Rights Act (VRA), considered the most far-reaching civil rights legislation in modern US history. More than half a...