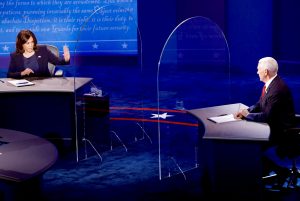 Harris and Pence on stage at the University of Utah (CNBC)

The coronavirus took center stage in last night's vice presidential debate as the two nominees clashed over what Senator Kamala Harris called, "the greatest failure of any presidential administration in the history of our country."

The debate followed a devastating week for the administration after a September 26th White House super-spreader event resulted in infecting the President, First Lady, and now 32 senior staff and aides with the coronavirus.

The unprecedented circumstances going into Wednesday's debate, where  Harris and Vice President Mike Pence were separated by 13 feet and plexiglass dividers, was eclipsed only by the announcement this morning that the next presidential debate would be held virtually.

In what may be the last debate of the 2020 election cycle, Harris and Pence addressed a series of nine questions posed by USA Today Washington Bureau Chief Susan Page, who moderated a somewhat civil exchange compared to last week's disastrously chaotic presidential debate between Biden and Trump. 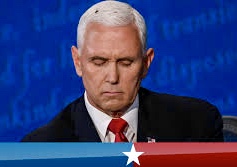 While Pence's calm demeanor was a marked contrast to Trump's bullying and mudslinging, Pence still repeatedly spoke over his allotted time, frequently speaking over both Harris and Page as well.

During one exchange where Pence went over time, Page remanded him, "You've had more time than she's had so far. I did not create the rules tonight. Your campaigns agreed to the rules for tonight's debate."

In addition to her relentless questioning of Trump and Pence's handling of the coronavirus, Harris attacked Pence on healthcare, trade, Trump's slander against US military members and the President's reluctance to condemn white supremacists at last week's presidential debate.

Pence repeatedly came back to Biden's plan to raise some taxes for the wealthy, called Biden a "cheerleader for communist China," accused Biden of wanting to "bury our economy" under the Green New Deal, and decried Harris as the Senate's most liberal member, even "more than Bernie Sanders." 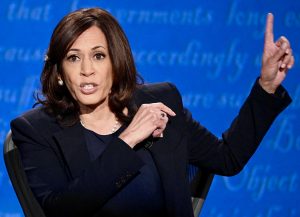 Harris said Biden would rejoin the Paris Climate accord, calling climate change an "existential threat." On direct rebuttal, Pence declined to agree to the description, saying he and Trump "will follow the science," despite their public stance to the contrary.

Both declined to directly answer whether their administration would embrace the idea of expanding the Supreme Court, and on the subject of the threat to Roe v. Wade under a new court, Pence said, "I couldn't be more proud to serve as vice president to a President who stands on a policy for the sanctity of human life."

On the question of the peaceful transition of power, Pence said, "When you talk about accepting the outcome of the election, I must tell you, Senator, your party has spent the last three years and a half years trying to overturn the results of the last election...President Trump and I are fighting every day in courthouses to prevent Joe Biden and Kamala Harris from changing the rules and creating this universal mail-in voting, they'll create a massive opportunity for voter fraud."

Page closed the debate by reading a letter from Brecklyn Brown, an eighth grader, which served as both question and statement. 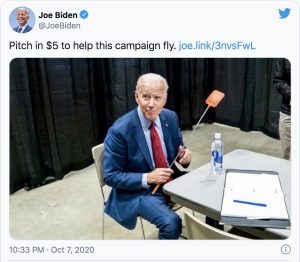 Post-debate, the Biden campaign capitalized on the only light moment of the evening, when a fly landed on Pence's head.

As of this writing, the next presidential debate, if any, is still undetermined.

December 13, 2022 When Americans went to the polls November 8 they cast their votes not just for candidates, but for hundreds of state and local ballot measures across the country on issues...

President Obama sent a clear signal today that he has no intentions of staying on the sidelines in the final months of his Presidential term.