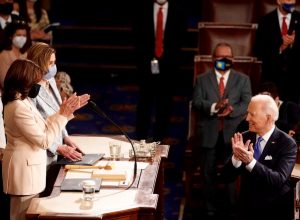 Biden: "Thank you all. Madam Speaker, Madam Vice President. No president has ever said those words from this podium.. and it's about time.(Andrew Harnik/AFP)

The well-crafted one hour, 18-minute speech laid out one of the most ambitious and progressive agendas in decades. Throughout, the themes of unity, investment in America, and "democracy still works" prevailed, combined with a call for healing and restoration.

The Highlights: Excerpts from the speech
"Tonight, I come to talk about crisis and opportunity. About rebuilding a nation, revitalizing our democracy and winning the future for America.

One hundred days since I took the oath of office...and inherited a nation, we all did, that was in crisis. The worst pandemic in a century, the worst economic crisis since the Great Depression, the worst attack on our democracy since the Civil War.

100 days ago, America's House was on fire. We had to act...Together, we passed the American Rescue Plan, one of the most consequential rescue packages in American history. We're already seeing the results.

* I promised we'd get 100 million COVID-19 vaccine shots into people's arms in 100 days. We will have provided over 220 million COVID shots in those 100 days. Everyone over the age of 16 is now eligible to get vaccinated. 70% of seniors in America over 65 are protected. Senior deaths from COVID-19 are down 80% since January. 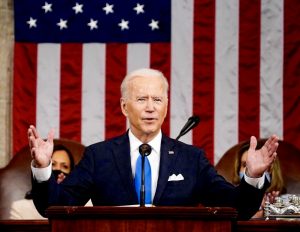 * $1,400 rescue checks to 85% of American households.
* food and nutrition assistance to millions of Americans facing hunger--and hunger is down sharply already.
* providing rental assistance...loans to small businesses to reopen and keep their employees on the job.
* an additional 800,000 Americans enrolled in the Affordable Care Act.
* on track to cut child poverty in America in half this year.

The economy created more than 1,300,000 new jobs in 100 days. More jobs than the first 100 days than any president on record...our economy will grow at a rate of more than 6% this year...the fastest pace of economic growth in this country in nearly four decades.

But we can't stop now...We're at a great inflection point in history. We have to do more than just build back better...we have to compete more strenuously than we have. Throughout our history...public investment in infrastructure has literally transformed America. Our attitudes as well as our opportunities.

We'll create thousands and thousands of good paying jobs.
* replacing 100% of the nation's lead pipes.
* connecting every American with high-speed internet, including 35% of rural America that still doesn't have it.
* lay thousands of miles of transmission lines needed to build a resilient and fully clean (power) grid.
* create jobs for our caregivers with better wages and better benefits 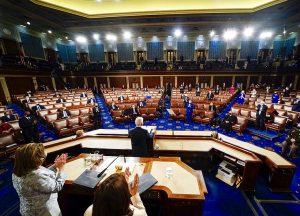 For too long, we failed to use the most important word when it comes to meeting the climate crisis: jobs, jobs, jobs.
* put engineers and construction workers to work building more energy efficient buildings and homes. Electrical workers, IBEW members, installing 500,000 (electric car) charge stations.
* Farmers planting cover crops so they can reduce the carbon dioxide in the air and get paid for doing it.
* Nearly 90% of the infrastructure jobs created in the American Jobs Plan do not require a college degree. 75% don't require an associate's degree.

* I'm calling on Congress to pass Protect the Right to Organize Act, the PRO Act and send it to my desk so we can support the right to unionize.
* let's raise the minimum wage to $15. No one working 40 hours a week should live below the poverty line.
* let's get the Paycheck Fairness Act to my desk as well. Equal pay. It's been much too long.
* the biggest increase in non-defense research and development on record. ..We'll see more technological change in the next 10 years than we saw in the last 50. 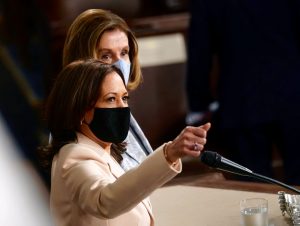 Biden on Jobs Plan: "I'm asking the vice president to lead this effort...because I know it will get done" (Andrew Harnik/AP)

We're falling behind the competition with the rest of the world. ..We have to develop and dominate the products and technologies of the future, the advanced batteries, biotechnology, computer chips, clean energy.

The National Institutes of Health should create a(n) advanced research project agency for health. It would have a singular purpose: to develop breakthroughs to prevent, detect and treat diseases like Alzheimer's, diabetes and cancer. I know of nothing that is more bipartisan, so let's end cancer as we know it.

So let's get to work... I welcome those ideas. But the rest of the world is not waiting for us. I just want to be clear, from my perspective, doing nothing is not an option.

* First is access to good education. Twelve years is no longer enough today to compete with the rest of the world in the 21st century...Four additional years of public education for every person in America (including) two years of universal high-quality preschool for every 3- and 4-year-old. 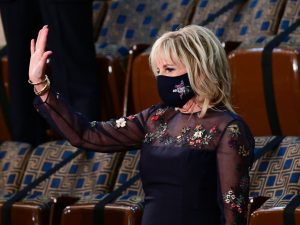 First Lady and educator Dr. Jill Biden will be "deeply involved." "She's long said 'Joe, any country that out educates us is going to outcompete us.' (Bazaar)

* Second...access to quality, affordable child care... low and middle income families will pay no more than 7% of their income for high quality care for children up to the age of 5.
* Third...provide up to 12 weeks of paid leave and medical leave, family medical leave.
* Fourth...extend that child care tax credit at least through the end of 2025."

How do we pay for (it)? Reform corporate taxes so they pay their fair share and help pay for the public investments their businesses will benefit from as well...I will not impose any tax increase on people making less than $400,000.

The climate crisis is...a global fight. The United States accounts for less than 15% of carbon emissions. The rest of the world accounts for 85%. I kept my commitment to rejoin the Paris Climate Agreement on my first day in office...and to convene a climate summit right here in America, with all of the major economies of the world -- from China and Russia to India and the European Union. 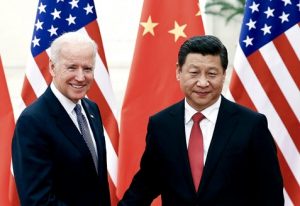 We will defend America's interests across the board.
* stand up to unfair trade practices that undercut American workers and American industries. In my discussions with (China) President Xi, I told him we welcome the competition. We're not looking for conflict. (As long as) every nation plays by the same rules in the global economy.
* maintain a strong military presence in the Indo-Pacific, just as we do with NATO and Europe. Not to start a conflict, but to prevent one...America will not back away from our commitment to human rights and fundamental freedoms, and to our alliances.
* I made very clear to [Russian President Vladimir] Putin that we're not going to seek escalation, but their actions will have consequences ... so I responded directly and proportionately to Russia's interference on our elections and the cyberattacks on our government and our business. But we can also cooperate when it's in our mutual interest.
* on Iran and North Korea, we're going to be working closely with our allies to address the (nuclear) threats posed by both of these countries.
*American leadership means ending the forever war in Afghanistan.
* and we won't ignore what our intelligence agency has determined to be the most lethal terrorist threat to the homeland today: white supremacy's terrorism.

The vast majority of men and women wearing the uniform and a badge serve our communities and they serve them honorably. I know they want to help meet this moment as well. 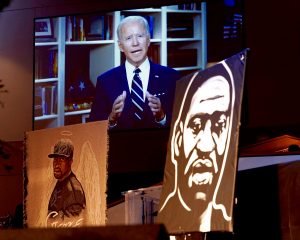 We have to come together to rebuild trust between law enforcement and the people they serve, to root out systemic racism in our criminal justice system and to enact police reform in George Floyd's name that passed the House already...let's get it done next month by the first anniversary of George Floyd's death.

We have a giant opportunity to bend the ark of the moral universe towards justice, real justice.
* I want to thank the United States Senate for voting 94-1 to pass COVID-19 Hate Crimes Act to protect Asian-American and Pacific Islanders. ..I urge the House to do the same.
* let's authorize the Violence Against Women Act, which has been law for 27 years. I wrote it. It will close the boyfriend loophole to keep guns out of the hands of abusers.
* I also hope Congress will get to my desk the Equality Act to protect LGBTQ Americans.

I need not tell anyone this but gun violence has become an epidemic in America...it is time for Congress to act as...This shouldn't be a red or blue issue, and no Amendment to the Constitution is absolute...it's an American issue. 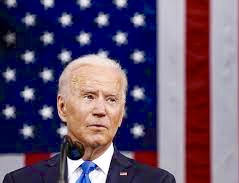 Let's end our exhausting war over immigration. On day one of my presidency, I kept my commitment to send a comprehensive immigration bill to the United States Congress. If you believe we need to secure the border, pass it. If you believe in a pathway to citizenship, pass it...Congress needs to secure protection for Dreamers...And permanent protection for immigrants who are here on temporary protective status. Let's debate it, but let's act.

And if we truly want to restore the soul of America, we need to protect the sacred right to vote. More people voted in the last Presidential election than any time in American history, in the middle of the worst pandemic ever. It should be celebrated. Instead, it's being attacked. Congress should pass HR-1 and the John Lewis Voting Rights Act. 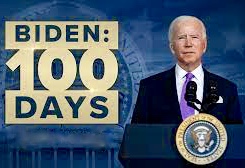 In conclusion, as we gather here tonight, the images of a violent mob assaulting this Capitol, desecrating our democracy remain vivid in all our minds. Lives were put at risk, many of your lives. Lives were lost.

Can our democracy overcome the lies, anger, hate, and fears that have pulled us apart? America's adversaries, the autocrats of the world, are betting we can't. They look at the images...as proof that the sun is setting on American democracy. But we have to prove them wrong. We have to prove democracy still works, that our government still works, and we can deliver for our people.

It's never ever, ever been a good bet to bet against America and it still isn't. We're the United States of America."