Corporate America is on notice as calls for an economic boycott in Georgia grow after the Peach State adopted an egregious voter suppression laws that reduce access to the ballot box, give state-level officials the authority to override county election boards, and even criminalizes distributing food and waters to voters waiting in lines.

The boycott extends not just to companies, but to the sports and entertainment industry as well.

Civil rights groups are urging professional golfers to refuse to play in The Masters, golf's premier tournament scheduled in Augusta in April unless the law is repealed. The Masters routinely brings in $100+ million in local revenue. 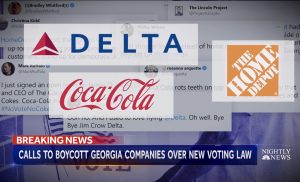 Major League Baseball Players Association executive director Tony Clark told The Boston Globe that some players want to move July's All-Star game from Cobb County because they feel the law suppresses minority voters. He added that he "would look forward" to discussing the move from Georgia. The 2019 All-Star game brought in $65 million in revenue for its host, Cleveland, Ohio.

More than one Hollywood director has already said they will not work in Georgia, which boasts a $10 billion film industry business with infrastructure and incentives among the best in the country.

Ford v Ferrari director James Mangold, who shot part of that film in Georgia, said, "Georgia has been using cash to steal movie jobs from other states that allow people to vote. I don't want to play there. The state will be irredeemably red with these new 'laws." 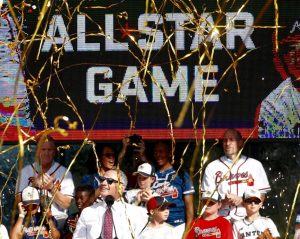 The 2021 All Star game, for now, scheduled in Georgia (Kavitha A. Davidson)

Georgia-based corporations including Aflac, Delta Air Lines, Home Depot, UPS and Southern Company are among the companies being pressured to take a stand.

Bishop Reginald Jackson, who leads a group of more than 500 African Methodist Episcopal churches in Georgia, said until Coca-Cola, one of the state's largest employers, speaks out against the law, Black and Latino consumers need to "speak with our wallets."

Boycott proponents also advocate for companies to stand up against voter suppression bills like Georgia's by withholding political contributions to lawmakers that co-sponsor or support such measures at the state and federal level.

This presents a delicate dance for corporations like Coca-Cola, which must balance their interests at the state and federal level. In 2020, 82% of corporate executives and individuals associated with the company contributed to Joe Biden's campaign, compared to 18% for Donald Trump. Coke's federal political action committee contributes 56% to Democrats vs. 44% to Republicans.

In Georgia, however, where Republicans control both legislative chambers, Coca-Cola has donated to 29 co-sponsors of the two original House and Senate bills that led to SB202, the voter suppression bill now in law. 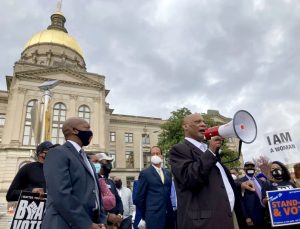 Last summer, following the George Floyd killing, Coca-Cola's chief executive, James Quincey, said the company would "invest our resources to advance social justice causes" and "use the voices of our brands to weigh in on important social conversations."

Yesterday, Coca-Cola released a statement on the controversial Georgia voting legislation saying, "While we are disappointed in the outcome, we don't see this as the final chapter."

Coca-Cola's statement, which does not directly denounce the bill by name, said the company opposes "measures that would seek to diminish or restrict voter access" and "will continue to meet with a wide array of stakeholders inside and outside of Georgia to hear their views, work together, and advocate for greater voting access."

While some dismiss the effectiveness of boycotts, there is precedent for success.

In 2019 multiple major film production companies revolted over Georgia's "heartbeat abortion bill," which banned abortions in cases where a fetal heartbeat could be detected.

Color Force, which produced the "Hunger Games" movies previously filmed in the state threatened to pull out, as did Amazon Studios, Warner Media, Disney, Netlix and other major entertainment companies. 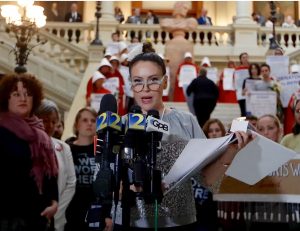 In 2020, the National Collegiate Athletic Association announced a ban on playing games in any state bearing any or all of the Confederate flag as a part of their state flag. Mississippi, the country's last holdout, changed its flag six months later.

In 2017, the National Basketball Association moved its own All-Star Game from Charlotte, North Carolina, in response to the state's HB2 "bathroom bill" law which drew national criticism for its discriminatory nature against the LGBTQ community. The actions and the boycott by a multitude of businesses were credited with the legislature's repeal of the law later that year.

Former state gubernatorial candidate and voting rights advocate Stacey Abrams argued against the abortion law boycott in 2019, and lobbied the entertainment industry to use their "energy and resources...to stay in Georgia and fight to create lasting political change."

This week, the organizing director of Fair Fight, Abrams' organization, tweeted, “Georgia is only the beginning, and business leaders need to make a decision NOW: stand with Jim Crow 2.0...or stand with democracy.”

DemList relies on your individual contributions to support our work. Please help today with $25, $50 or $100.

June 16, 2021 This evening the US House of Representatives voted 415 to 14 to pass H.R. 1320, establishing June 19th as Juneteenth National Independence Day, which commemorates the end of slavery...