What a difference a day makes. In the last three, Joe Biden has waged a successful comeback, setting off a chain reaction that is reshaping the course of the presidential race.

On Saturday, Biden got his much-needed win in the South Carolina presidential primary, surpassing the rest of the field in double digits with 48%, followed by Bernie Sanders @20%, Tom Steyer @11%, Pete Buttigieg @8%, Elizabeth Warren @ 7%, Amy Klobuchar @3% and Tulsi Gabbard with just over 1%. 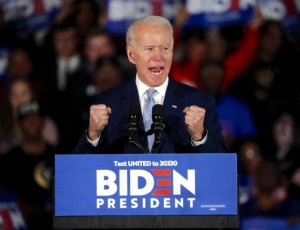 Biden: "Democrats want a nominee who's a Democrat. An Obama-Biden Democrat" (Gerald Herbert/AP)

In the Palmetto State, where 60% of the voting population is African American, Biden captured 61% of the black vote, compared to Sanders with 17%, Steyer with 13%, Warren 5% and Buttigieg 3%.

Biden's popularity nationally among this constituency has been a central component in arguing for the viability of his candidacy.

The night was a critical turning point in the heavily-contested presidential contest that started with over 25 candidates and is now dwindled to five.

On Saturday night, acknowledging that he could not see a path to victory, billionaire business man and environmental activist Tom Steyer ended his campaign. "When the Lord closes a door he opens a window. I will find that window and crawl through it with you, I promise you that."

On Sunday, former South Bend, Indiana Mayor Pete Buttigieg, whose campaign rose from near obscurity to victory in the Iowa Caucuses, ended his bid. "The truth is the path has narrowed to a close for our candidacy if not for our cause. We must recognize that at this point in the race, the best way to keep faith with those goals and ideals is to step aside and help bring our party and country together."

In question is whether Biden, now within single digits of Sanders in the delegate count, can overcome Sanders' extensive ground and advertising advantage in tomorrow's Super Tuesday primaries. 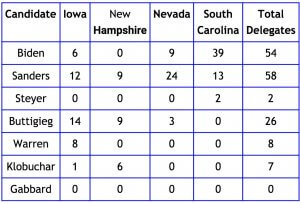 In California alone, Bernie Sanders has 23 campaign offices compared to Biden's one.

California will award 415 delegates, more than a fifth of the total needed to secure the nomination. The Golden State, along with 13 of Tuesday's primaries, also has early voting, which means many voters -- possibly as much as half -- may have cast their ballots prior to Biden's blowout in Saturday's South Carolina's contest.

While Sanders has outraised and out-organized most rivals to date, his operation will now be competing with the unlimited resources of former New York City Mayor Michael Bloomberg, the world's 14th richest person.

Although Bloomberg has spent close to $540 million on advertising and building a campaign operation since entering the race in late November, he skipped the first four primary contests, making Tuesday the first time his name will be on the ballot.

Although Bloomberg is the wildcard in the race, there can be no doubt that the Klobuchar and Buttigieg endorsements of Biden will have some influence in the outcome of Tuesday's 16 contests. To what end will be answered in the next 24 hours. 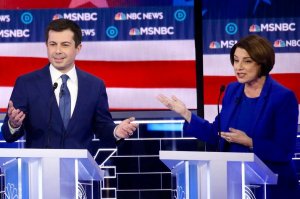