Joe Biden's long-awaited announcement for US President came today, taking on President Donald Trump out of the gate.

JOE BIDEN
The former Vice President enters the race as the presumed front-runner, having consistently ranked top in the polls amongst Democratic voters.

But as someone who has been in the public eye longer than any current contender, his record serves as both an asset and a liability.

In contrast to the current president, whose lack of experience in public office has been disastrous for our country's domestic and international policies, Biden offers an umatched level of experience as a veteran of the Senate and the White House. 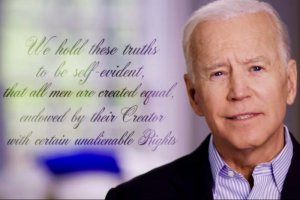 At 76, however, he is one of the oldest candidates by decades amongst the primary field, second in age only to Bernie Sanders, 77.

His more traditional, "tactile" style of hugging women and children has also brought accusations of inappropriate behavior and insensitivity to younger generations.

At a time when the Democratic party has moved to the left ideologically, and is emphasizing the need for diversity in representation, many question whether a white, elder statesman, can sustain an appeal to the party's growing, and critical, minority base.

Should he make it through the primary, however, his working-class roots and ability to attract white blue-collar voters, could make him the strongest candidate to defeat a Trump candidacy one-on-one.

Background
A native of Scranton, Pennsylvania, Joe Biden, 76, is the oldest of four siblings born to Catherine (Finnegan), who was of Irish descent, and Joseph Biden Sr, of English, French, and Irish ancestry.

He earned his bachelor's in 1965 from the University of Delaware, with a double major in history and political science, and his law degree from Syracuse University College of Law in 1968.

In 1966, he married Neilia Hunter and they had three children, Beau, Hunter and Naomi. 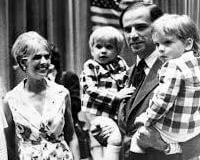 Biden with late wife Neilia and sons Beau and Robert at Democratic state convention in December, 1972.

In 1970, Biden was elected to the New Castle County Council and, in 1972, challenged Republican US Senator "Cale" Boggs, defeating the two-term incumbent by a margin of 3,162 votes.

Weeks later, however, as Biden prepared to take office at age 30, the sixth-youngest senator in American history, Neilia and his infant daughter Naomi were killed in a car crash. Throughout his subsequent 36 years in the US Senate, he traveled the 90-minute train commute each day to his home to be with his family.

US Senate
Biden was subsequently re-elected to the US Senate six times, receiving a minimum of 58% of the vote in each race.

Considered a centrist In the Senate with a reputation for reaching across the aisle, Biden's ideology as a now self-proclaimed progressive, has evolved over time.

His early years were focused on consumer-protection and environmental issues and in 1986 he introduced Congress' first climate bill. 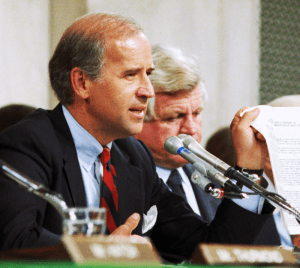 At 1991 Clarence Thomas confirmation hearings/Anita Hill testimony. He later said he "could have done better."

As a long-time member and former chairman of the Foreign Relations Committee, he opposed the Gulf War in 1991, but advocated US and NATO intervention in the Bosnian War in 1994 and 1995. He voted in favor of the resolution authorizing the Iraq War in 2002, but opposed the surge of US troops in 2007.

As a member and former chairman of the Senate Judiciary Committee, he led the efforts to pass the Violent Crime Control and Law Enforcement Act and, in 1993, introduced the Violence Against Women Act. He also chaired the Judiciary Committee during the contentious US Supreme Court nomination of Clarence Thomas, including the controversial testimony of Anita Hill alleging sexual misconduct against the nominee.

Although he supports preservation of the landmark 1973 Supreme Court's decision in Roe v. Wade, which legalized abortion, in the Senate he voted consistently to deny federal funding for abortion.

Obama-Biden
Biden unsuccessfully sought the Democratic presidential nomination in 1988 and in 2008, before being tapped as Barack Obama's running mate in August of 2008, in opposition to the Republican ticket of John McCain and Sarah Palin.

Following the historic November, 2018 election that put Obama, America's first African-American into office, Biden was sworn in as the 47th Vice President of the United States. 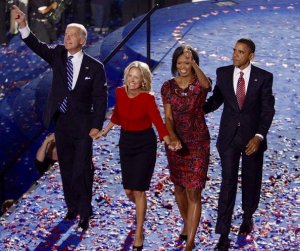 As Vice President, Biden oversaw infrastructure spending aimed at counteracting the Great Recession and was instrumental in formulating US policy toward Iraq and other countries. His skill as a negotiator helped the Obama administration pass the Tax Relief, Unemployment Insurance Reauthorization, & Job Creation Act of 2010, the Budget Control Act of 2011, and the American Taxpayer Relief Act of 2012.

In May of 2012, the Vice President's support for marriage equality and LGBT rights, announced on national television, prompted President Obama to do the same days later.

In November of 2012, Obama and Biden were re-elected, winning 332 Electoral College votes to 206 for the Republican ticket of Mitt Romney-Paul Ryan.

In his second term, Biden continued to play a role in foreign affairs, and was a visible voice as head of the Gun Violence Task Force, and Co-Chair of the White House Task Force to Protect Students from Sexual Assault.

In October 2015, following the death months before of his son, Beau Biden, 46, from brain cancer, Biden announced he would not seek the presidency in the 2016 elections. 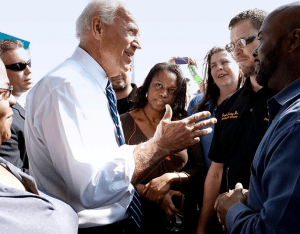 His entry today into the 2020 presidential contest makes him the 19th serious contender for the Democratic nomination.

Website: Biden for President
Books: Promises To Keep: On Life and Politics (2008), Promise Me Dad: A Year of Hope, Hardship and Purpose (2017) 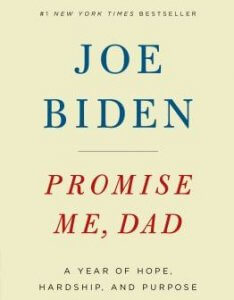 August 14, 2018 The Old-Age, Survivors, and Disability Insurance (OASDI) program, otherwise know as Social Security, turns 83 years-old today. Its future, however, like many of the benefits for...