It has now been over a year that Americans have been living under the devastating cloud of the coronavirus pandemic.

When Donald Trump finally proclaimed a national emergency on March 13, 2020, there were 2,030 confirmed cases of coronavirus in the United States and 45 deaths.

COVID-19 numbers in the US now stand at 30,962,025 cases and over 554,420 fatalities, as the Biden administration aggressively attacks the pandemic through implementation of a national coronavirus policy, executive orders and relief legislation.

The first three, signed by the new president on inauguration day, included mandatory mask-wearing requirements on federal property, the establishment of a White House COVID office, and rejoining the World Health Organization.

Others accelerated PPE production, mandated masks on public transportation, directed OSHA to enforce worker health and safety requirements, and ordered  the Department of Education and HHS to provide guidance for safely reopening and operating schools.

On March 11th, 50 days into his presidency, Biden signed into law the $1.9 trillion American Rescue Plan Act, which focuses on providing economic relief to struggling Americans.

In addition to providing direct stimulus checks to US citizens, the Plan includes, among other benefits. $50 billion for vaccine distribution, $47.8 billion for COVID-19 testing and prevention, $10 billion for PPE production, and $7.7 billion for increased staffing of public health departments.

Biden's American Jobs Plan, unveiled on March 31st, also included $30 billion to prevent future pandemics, plus hundreds of billions for aspects of American infrastructure which have been tested by the pandemic: $100 billion for nationwide high-speed broadband, $100 billion for upgrading and building public schools, and $400 billion for improvements to home or community-based care for the elderly and people with disabilities.

On Tuesday, April 6th, Biden announced that every adult in the U.S. will be eligible to be vaccinated by April 19th, well ahead of his original deadline of May 1st.

The Race to Vaccinate
The US is now administering an average of over 3 million vaccine doses per day and, for the first time, exceeded 4 million doses administered in a 24 hour period last weekend. 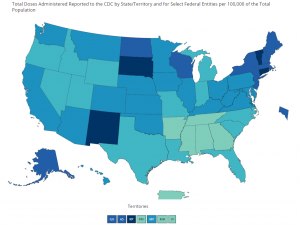 Vaccinations by State and Territory (CDC/Click)

According to the Centers for Disease Control (CDC), the states with the highest vaccination rates, as measured by number of doses administered per 100k residents, are New Mexico, South Dakota, Connecticut, Rhode Island and Vermont.

The COVID Count
Despite the all-out assault on the pandemic, Americans are not out of the woods yet. 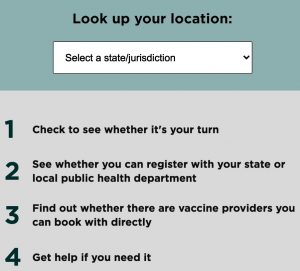 According to the CDC, cases of COVID-19 rapidly decreased from mid-January to late February, before a small uptick in early March.

In mid-March, the nation hit a low of less than 40,000 cases per day, a number last seen in October of 2020. Since then, however, cases have slightly increased, reaching over 61,000 daily cases on Tuesday, April 6th.

April 17, 2019 Today, at 6:50pm local time in Paris, cathedrals across France rang their bells in honor of Notre Dame Cathedral, marking the time that the 856-year-old church fell victim to a...